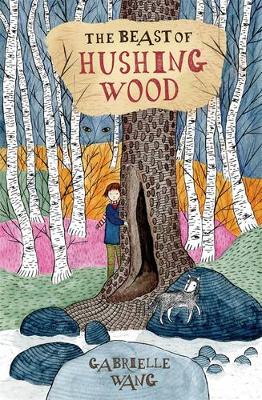 The Beast of Hushing Wood

Description - The Beast of Hushing Wood by Gabrielle Wang

By the award-winning author of The Wishbird. A powerful magic realism story about Ziggy Truegood, a young girl who has a premonition that she will drown on her 12th birthday.

Ziggy Truegood lives in a tiny town deep in Hushing Wood, where strange things are happening. The townspeople are fighting, Ziggy feels like something is hunting her, and her beloved woods have become dark and hostile. When exotic Raffi and his grandfather arrive in town, Ziggy finds herself strangely drawn to them. But are they there to save Ziggy, or are they the hunters?

Thought-provoking and engaging, Hushing Wood is a lovely blend of action, fable and magic realism.

Book Reviews - The Beast of Hushing Wood by Gabrielle Wang

» Have you read this book? We'd like to know what you think about it - write a review about Beast of Hushing Wood book by Gabrielle Wang and you'll earn 50c in Boomerang Bucks loyalty dollars (you must be a Boomerang Books Account Holder - it's free to sign up and there are great benefits!)

Gabrielle Wang is an author and illustrator born in Melbourne of Chinese heritage. Her maternal great grandfather came to Victoria during the Gold Rush and her father from Shanghai. Her stories are a blend of Chinese and Western culture with a touch of fantasy. Gabrielle's first children's novel, The Garden of Empress Cassia, won the 2002 Aurealis Award, was shortlisted for the Queensland Premier's Literary Awards and was a CBCA Notable Book. The Pearl of Tiger Bay was shortlisted for the 2004 Aurealis Award and The Lion Drummer was a Notable Book in the 2009 CBCA Book of the Year Awards. A Ghost in My Suitcase won the 2009 Aurealis Award, was a CBC Notable Book, was shortlisted for the 2011 Sakura Medal and received a Highly Commended in the 2010 Prime Minister's Literary Awards. Her first young adult novel, Little Paradise also received a Highly Commended in the 2011 Prime Minister's Awards. Gabrielle's picture book The Race for the Chinese Zodiac (2010) illustrated by Sally Rippin and Regine Abos was a Notable Book in the CBCA Awards for 2011 and shortlisted for the 2011 YABBA and WAYBRA awards. Her latest books are part of the highly successful 2011 Our Australian Girl series published by Penguin - Meet Poppy, Poppy at Summerhill, Poppy and the Thief and Poppy Comes Home. Gabrielle is an ambassador for the Victorian Premiers' Reading Challenge. The Wishbird, publlished in 2014, was a CBCA 2014 Notable Book and was shortlisted for the 2014 Australian Book Design Awards, Yabba Awards, Kroc Awards, Koala Awards, Cool Awards and Crystal Kite Award.