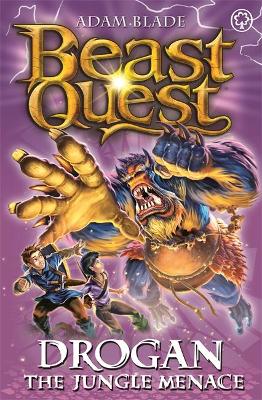 Battle fearsome beasts and fight evil with Tom and Elenna in the bestselling adventure series for boys and girls aged 7 and up.Tom and Elenna have tackled many Beast Quests before, but now there is a challenger for his title of Master of the Beasts! Join them as they fight a new set of Beasts and battle to save the kingdom...There are FOUR thrilling adventures to collect in the Beast Quest: The Trial of Heroes series: Krytor the Blood Bat; Soara the Stinging Spectre; Drogan the Jungle Menace; Karixa the Diamond Warrior.If you like Beast Quest, check out Adam Blade's other series: Team Hero, Sea Quest and Beast Quest: New Blood!

» Have you read this book? We'd like to know what you think about it - write a review about Beast Quest: Drogan the Jungle Menace book by Adam Blade and you'll earn 50c in Boomerang Bucks loyalty dollars (you must be a Boomerang Books Account Holder - it's free to sign up and there are great benefits!)

A Preview for this title is currently not available.
More Books By Adam Blade
View All