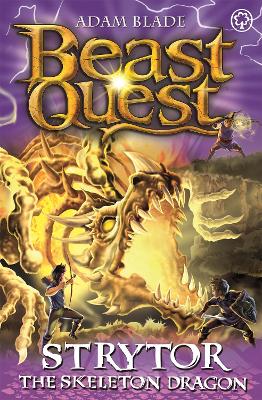 Battle fearsome beasts and fight evil with Tom and Elenna in the bestselling adventure series for boys and girls aged 7 and up.The Well of Power is guarded by the dragon Strytor. To prevent Evil Wizard Jezrin from drinking at the well and becoming invincible, Tom and Elenna must battle this deadly foe. But how can they stop an unkillable Beast?There are FOUR thrilling adventures to collect in this series - don't miss out! Quarg the Stone Dragon; Korvax the Sea Dragon; Vetrix the Poison Dragon and Strytor the Skeleton Dragon.If you like Beast Quest, check out Adam Blade's other series: Team Hero, Sea Quest and Beast Quest: New Blood!

» Have you read this book? We'd like to know what you think about it - write a review about Beast Quest: Strytor the Skeleton Dragon book by Adam Blade and you'll earn 50c in Boomerang Bucks loyalty dollars (you must be a Boomerang Books Account Holder - it's free to sign up and there are great benefits!)