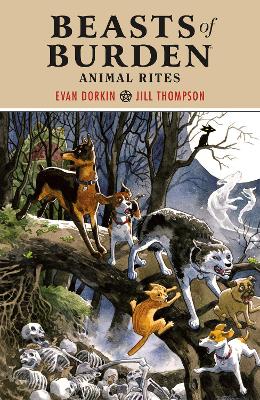 Black magic, demonic frogs, and zombie roadkill are just a few of the problems plaguing this seemingly sleepy little town. Beneath the quiet streets a rat cabal plots vengeance, while in the local cemetery the dead leave their graves. With the human residents unaware of the supernatural danger, it's up to a determined crew of dogs (and one cat) to keep their community safe. Lives will be lost, and bonds forged as the beasts of Burden Hill battle against an unknown evil rooted within their town.

"For pet lovers and enthusiasts of supernatural mysteries, the series is an absolute must. . . The surprise factor within this series is not the suspense or horror, but rather the emotional resonance that the writing and illustrations create. . . Beasts of Burden is one of the comic book highlights of 2009."--USA Today

Other Editions - Beasts Of Burden: Animal Rites by Evan Dorkin » Have you read this book? We'd like to know what you think about it - write a review about Beasts Of Burden: Animal Rites book by Evan Dorkin and you'll earn 50c in Boomerang Bucks loyalty dollars (you must be a Boomerang Books Account Holder - it's free to sign up and there are great benefits!)

Evan Dorkin (born April 20, 1965) is an American comics artist and writer. His most well-known works are the comic books Milk and Cheese and Dork. His comics often poke fun at fandom, even while making it clear that Dorkin is a fan himself. As well as his comics work, Dorkin has also written for animation, including (with his wife Sarah Dyer, also a comics writer/artist) Space Ghost- Coast to Coast. He also wrote and produced Bring me the Head of Boba Fett, an animated television pilot for Adult Swim called Welcome to Eltingville, based on his own characters. Dorkin and Dyer also wrote some episodes of the Superman animated series, particularly the episode "Live Wire," which introduced a new character of the same name. Additionally, the pair contributed to the script of the 2006 English-language version of the anime Shin Chan. After an initial six-episode order proved successful, more episodes were ordered, but Dorkin and Dyer are no longer working on the series. Dorkin has been the recipient of several Eisner Awards, including 2002's Best Writer/Artist- Humor.