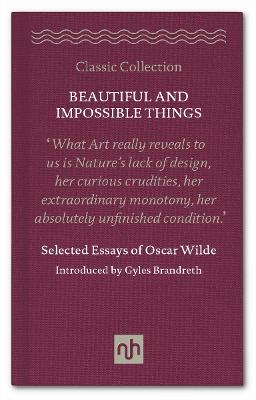 This new selection of essays by Oscar Wilde show-cases the varied aspects of his genius. For Pearson, the biographer, the essays and dialogues illustrate the many faces of Wilde's extraordinary character: wit, romancer, talker, lecturer, humanist and scholar. The ideas expressed remain remarkably relevant to modern readers, whilst his popularity remains undiminished.

» Have you read this book? We'd like to know what you think about it - write a review about Beautiful and Impossible Things book by Oscar Wilde and you'll earn 50c in Boomerang Bucks loyalty dollars (you must be a Boomerang Books Account Holder - it's free to sign up and there are great benefits!)

Oscar Wilde (1854-1900) was an Irish author, playwright and poet. He became one of London's most popular playwrights and is remembered for his epigrams, his classic novel The Picture of Dorian Gray, his plays, as well as the circumstances of his trial, imprisonment and early death. Welcomed into the highest social circles, Wilde became famous for his artistic genius, wit and flamboyant dress.Gyles Brandreth is a writer, broadcaster, actor, former MP and Government Whip. A reporter on the One Show on BBC 1 and a regular on Radio 4's Just a Minute, his many books include The Oscar Wilde Mysteries (published in 22 countries) and the No 1 best-seller The 7 Secrets of Happiness, as well as two volumes of political diaries. He is patron of The Oscar Wilde Society.