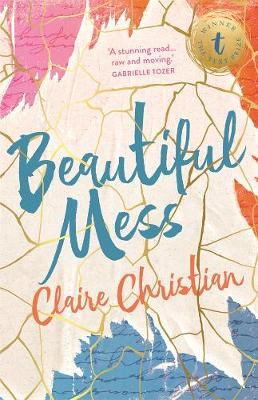 Since Ava lost Kelly, things haven't been going so well. Even before she gets thrown out of school for shouting at the principal, there's the simmering rage and all the weird destructive choices. The only thing going right for Ava is her job at Magic Kebab.

Which is where she meets Gideon. Skinny, shy, anxious Gideon. A mad poet and collector of vinyl records with an aversion to social media. He lives in his head. She lives in her grief. The only people who can help them move on with their lives are each other.

The winner of the 2016 Text Prize, Beautiful Mess is funny and sad and a bit screwed up and romantic and absolutely real. In other words, a lot like life.

» Have you read this book? We'd like to know what you think about it - write a review about Beautiful Mess book by Claire Christian and you'll earn 50c in Boomerang Bucks loyalty dollars (you must be a Boomerang Books Account Holder - it's free to sign up and there are great benefits!)

Beautiful Mess is the first novel by prize-winning Australian novelist and playwright, Claire Christian. When she actually attends, Ava Spirini is in Year 11 at MacGreggor State College, but her regular outbursts in the months since the death of her best friend, Kelly Waititi, have her on shaky ground. Insulting the principal, Mrs Bryan, abusing the school assembly and punching a classmate? Only so much can be excused due to grief before there are consequences. But they just don’t get it: “…she wasn’t just my best friend, she was my soul sister. And that kind of love doesn’t end. You can’t just move on from that.”

Hanging out (and more) with Kelly’s older brother, Lincoln is a way to be closer to her friend, though she’s not sure how Kelly would feel about that. At least her single Dad backs her up in every way, and her boss, Ricky at Magic Kebab, keeps her entertained.

Gideon Franks-Meyer is in Year 12 at Ava’s school. Despite unfailing support from his mums, Mandy and Susan, and his older sister, Annie, his battle with anxiety and depression has been a long and hard one. While he saw Ava’s assembly meltdown and remembers Kelly, he’s sure she won’t recognise him when he turns up to do dishes at Magic Kebab. He’s there because his therapist has suggested taking a “small, safe risk”. Friendship with this fiery girl might be possible if he can overcome crippling shyness; if she doesn’t think his poetry and record collection uncool; it’s probably more than he could wish for.

An alternating narrative gives both Ava and Gideon a voice: they are smart and perceptive, and between them, have many wise words to offer on mental illness. Their story features grief, guilt, self-harm (suicide and cutting), anxiety, depression, love, and friendship. It highlights society’s fixation on being normal and demonstrates the importance of finding the right therapist. Gideon’s poem “Broken” brilliantly encapsulates depression.

While there’s heartache, this is by no means a sombre tale and there’s plenty of humour in the dialogue: “’Do you actually have condoms?’ Susan says. I quickly interject, ‘Yes, I bought them.’ The last thing I need is a trip to Woolies with my mothers to buy condoms. I can just picture the argument in the aisle about which brand is best for durability and ethical production… Besides, what would either of them know about buying condoms?’”

While this novel may be branded as Young Adult, it is certain to appeal equally to older readers. The characters are endearing despite their sometimes unwise decisions and occasionally poor behaviour, the dialogue is believable and the story is important and uplifting. A brilliant debut from an author to watch.

Claire Christian is a novelist and playwright who lives in Brisbane. She has had three plays published by Playlab, and her play Bloom was shortlisted for the Griffin Award in 2009. She was one of the YWCA Queensland 100 leading women in 2013.

My Life as a Hashtag
Gabrielle Williams
$15.99 $19.99
More Books By Claire Christian
View All