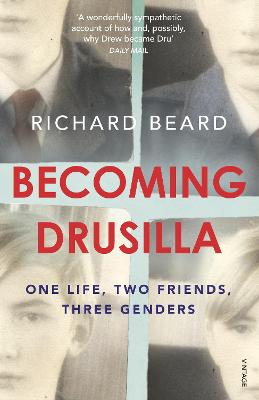 For years Richard Beard would take spontaneous holidays with his motor-cycling friend Drew. They would spend a few days walking, camping, cycling, canoeing - outdoor, manly fun - before returning to everyday life- wives, children, jobs. Richard was writing novels. Drew was working in the engine-room of cross-channel passenger ferries. Then one year Drew phoned to announce a complication- he was planning to have a sex change.This is the story of how Drew became Dru, of a friendship, of a fortnight's walking holiday after Dru's operation. And of how what we think we know about ourselves, our friends, and our families can turn out to be very, very wide of the mark. It's about secrets and preconceptions and confronting prejudices you didn't know you had.Becoming Drusilla is by turns warm, sad, funny but always human; it holds up a mirror to the extraordinary in outwardly ordinary lives.

» Have you read this book? We'd like to know what you think about it - write a review about Becoming Drusilla book by Richard Beard and you'll earn 50c in Boomerang Bucks loyalty dollars (you must be a Boomerang Books Account Holder - it's free to sign up and there are great benefits!)

Richard Beard is the author of four critically acclaimed novels- X20, Damascus, The Cartoonist and Dry Bones, and two works of non-fiction- Muddied Oafs, described by Frank Keating as 'the book rugby has been waiting for', and How To Beat The Australians. He won an Arts Council of England Award in 1997, and Damascus was a New York Times Notable Book of the Year in 1999.

A Preview for this title is currently not available.
More Books By Richard Beard
View All