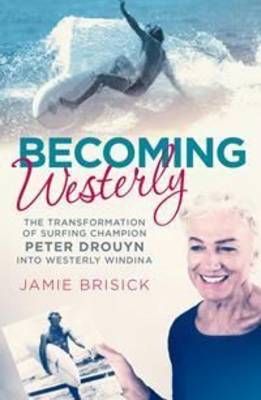 The Transformation of Surfing Champion Peter Drouyn into Westerly Windina

'Peter was always looking for a princess, he wanted to find his princess. Unfortunately, the princess was me. I'm the princess that Peter always wanted but never met.' Westerly Windina

'Westerly's affection for Peter comes in many guises. Most of the time it's wistful and forlorn. When she talks about his awkwardness, his pretending to be something he was not, she sounds like a mother remembering her deceased child.' Jamie Brisick, from Becoming Westerly

Peter Drouyn was a champion surfer with a touch of genius who forever changed the face of surfing by introducing the concept of the man-on-man competition format. Known for his aggressive yet elegant style on the wave, Drouyn was also a lawyer, heartthrob actor and showman extraordinaire, famous for his eccentric behaviour and ambitious ideas.

For nearly a decade now, Peter Drouyn has been living as a woman, Westerly Windina. The surfing community is at once awestruck, sceptical and supportive. As one renowned surf journalist put it, 'Is this Peter's greatest performance ever?' In a recent issue of Surfing World, surfers voted Peter/Westerly 'the most interesting surfer in the world'. And the world is taking notice.

Beginning with her 2012 trip to Bangkok for gender reassignment surgery, Becoming Westerly retraces Peter Drouyn's odyssey from teenage Queensland hopeful to 1960s global surfing sensation to embittered, middle-age has-been to the phoenix-like, glamorous, sixty-four-year-old Westerly. As Westerly herself notes, 'It was like a Supernova. It just kicked in one night and, bang, Peter was gone and Westerly was there. Part biography, part memoir, part documentary, part saga, Becoming Westerly is as much an exploration of surf culture and Australian society as it is of sexual identity. But most of all it is a portrait of two extraordinary people in one, and a very personal account of the courage and self-belief it has taken for Peter to become Westerly. 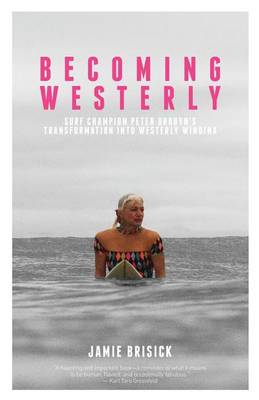 » Have you read this book? We'd like to know what you think about it - write a review about Becoming Westerly book by Jamie Brisick and you'll earn 50c in Boomerang Bucks loyalty dollars (you must be a Boomerang Books Account Holder - it's free to sign up and there are great benefits!)

Jamie Brisick is the author of Roman and Williams Buildings & Interiors: Things We Made (Rizzoli, 2012), The Eighties at Echo Beach (Chronicle, 2011), Have Board, Will Travel: The Definitive History of Surf, Skate and Snow (HarperCollins, 2004), and We Approach Our Martinis with Such High Expectations (Consafos Press, 2002). He is presently Global Editor of Huck, a U.K.-based surf/skate/snow magazine. He was previously Executive Editor of Surfing, the most widely read surf magazine in the world. His journalism has appeared in The New York Times, Details, The Guardian, The Sydney Morning Herald, and The Surfer's Journal. In 2008 he was awarded a Fulbright Scholarship to study and write about youth culture in Japan.

A Preview for this title is currently not available.
More Books By Jamie Brisick
View All