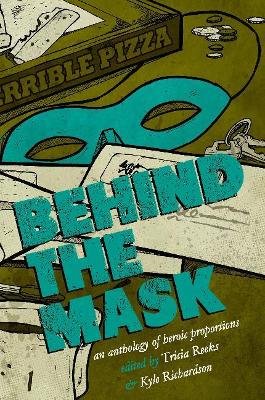 Description - Behind the Mask by Kelly Link

Behind the Maskis a multi-author collection with stories by award-winning authors Kelly Link, Cat Rambo, Carrie Vaughn, Seanan McGuire, Lavie Tidhar, Sarah Pinsker, Keith Rosson, Kate Marshall, Chris Large and others. It is partially a prose nod to the comic world - the bombast, the larger-than-life, the save-the-worlds and the calls-to-adventure. But it's also a spotlight on the more intimate side of the genre. The hopes and dreams of our cape-clad heroes. The regrets and longings of our cowled villains. That poignant, solitary view of the world that can only be experienced from behind the mask. The authors in this collection, both established and new, are all dexterous and wonderfully imaginative, each deserving of their own form-fitting uniforms and capes. Some of the stories pulse with social commentary, like Cat Rambo's whimsical and deft "Ms. Liberty Gets a Haircut" and Keith Rosson's haunting "Torch Songs." Others twist the genre into strange and new territories, like Stuart Suffel's atmospheric "Birthright," Kate Marhsall's moving "Destroy the City with Me Tonight," and Adam Shannon's reality-bending "Over an Embattled City." Some punch with heart and humor, like Matt Mikalatos's satisfying "The Beard of Truth" and Chris Large's adventurous "Salt City Blue," while others punch with bite and grit, such as Michael Milne's evocative "Inheritance," Aimee Ogden's poignant "As I Fall Asleep," and Jennifer Pullen's heartfelt "Meeting Someone in the 22nd Century." Some of the stories feature characters who might not be superheroes in the traditional sense, yet are heroic nonetheless, such as Sarah Pinsker's imaginative "The Smoke Means It's Working" and Stephanie Lai's majestic "The Fall of the Jade Sword." Some shine a unique, captivating spotlight on supervillains, like Keith Frady's dramatic "Fool" and Carrie Vaughn's romantic "Origin Story." Some are somber, ponderous works, where our heroes consider their impact on the world, like Lavie Tidhar's regret-tinged "Heroes" and Nathan Crowder's resonant "Madjack." Others tread more light-hearted waters, with heroes adjusting to the sometimes-comical, sometimes-stressful life in the public eye, like Seanan McGuire's entertaining "Pedestal" and Patrick Flanagan's lively "Quintessential Justice." And then there are the softer, quieter moments between heroes, as they navigate their extraordinary lives in their own unique ways, such as Ziggy Schutz's tender "Eggshells" and, of course, Kelly Link's captivating "Origin Story." Publisher's Weekly - "Reeks and Richardson have pulled together a treasure trove of 20 stories . . . exploring the lives of superheroes when they're not saving the world. . . . There is nary a miss in this diverse and thoughtful collection, which will have readers considering what it means to be human." Kirkus Reviews- (starred review) "A momentous, readable collection, its sole downside being that there areonly20 superhero stories."

Book Reviews - Behind the Mask by Kelly Link

» Have you read this book? We'd like to know what you think about it - write a review about Behind the Mask book by Kelly Link and you'll earn 50c in Boomerang Bucks loyalty dollars (you must be a Boomerang Books Account Holder - it's free to sign up and there are great benefits!)

Kelly Link is the author of four short story collections: Get in Trouble, a finalist for the 2016 Pulitzer Prize in Fiction, Pretty Monsters, Magic for Beginners, and Stranger Things Happen. She lives with her husband and daughter in Northampton, Massachusetts. Cat Rambo lives, writes, and teaches atop a hill in the Pacific Northwest. Her 200 fiction publications include stories in Asimovs, Clarkesworld Magazine, and the Magazine of Fantasy and Science Fiction. She is an Endeavour, Nebula, and World Fantasy Award nominee. Her second novel, Hearts of Tabat, appears in early 2017 from Wordfire Press. She is the current President of the Fantasy and Science Fiction Writers of America. For more about her, as well as links to her fiction, see www.kittywumpus.net Carrie Vaughn is best known for her New York Times bestselling series of novels about a werewolf named Kitty, who hosts a talk radio show for the supernaturally disadvantaged, the fourteenth installment of which is Kitty Saves the World. She's written several other contemporary fantasy and young adult novels, as well as upwards of 80 short stories. She's a contributor to the Wild Cards series of shared world superhero books edited by George R. R. Martin and a graduate of the Odyssey Fantasy Writing Workshop. An Air Force brat, she survived her nomadic childhood and managed to put down roots in Boulder, Colorado. Visit her at ww.carrievaughn.com. Seanan McGuire watches too much television, which does not explain how she also writes three books a year (as two different people, no less - she's also Mira Grant), dozens of short stories, and endless blog posts. It has been posited that she may be a Time Lady herself, or possibly an alien pod plant. Both seem equally likely. Seanan has been nominated for a variety of genre awards, and won the 2011 Campbell Award for Best New Writer. Lavie Tidhar is the author of the Jerwood Fiction Uncovered Prize winning and Premio Roma nominee A Man Lies Dreaming (2014), the World Fantasy Award winning Osama (2011) and of the critically-acclaimed The Violent Century (2013). His latest novel is Central Station (2016). He is the author of many other novels, novellas and short stories. Sarah Pinsker is the author of the 2015 Nebula Award winning novelette Our Lady of the Open Road. Her novelette In Joy, Knowing the Abyss Behind was the 2014 Sturgeon Award winner and a 2013 Nebula finalist. Her fiction has been published in magazines including Asimovs, Strange Horizons, Lightspeed, Fantasy & Science Fiction, and Uncanny, among others, and numerous anthologies. Her stories have been translated into Chinese, French, Spanish, Italian, and Galician. She is also a singer/songwriter with three albums on various independent labels and a fourth forthcoming. She lives in Baltimore, Maryland with her wife and dog. She can be found online at sarahpinsker.com and twitter.com/sarahpinsker. Tricia Reeks lives in the bear-infested mountains of Asheville, North Carolina with her mountaineer husband and her two ferocious French Bulldogs. She is the founder of Meerkat Press and the editor of Love Hurts: A Speculative Fiction Anthology. Kyle Richardson lives in the suburban wilds of Canada with his encouraging wife Michelle, their rambunctious son Kai, and a staircase that Kyle seems to be constantly tumbling down. He writes about shape-shifters, superheroes, and the occasional clockwork beast, moonlights as an editor at Meerkat Press, and has been working on his first novel for so long now, his wife has resorted to ultimatums. He made his short-fiction debut in Love Hurts: A Speculative Fiction Anthology and has since sold stories to Daily Science Fiction and his enthusiastic mother, at exorbitant rates.

A Preview for this title is currently not available.
More Books By Kelly Link
View All

Steampunk! An Anthology Of Fantastically
No Stock on Hand, Supplier Has No Due Date for Supply.
$22.49 $24.99