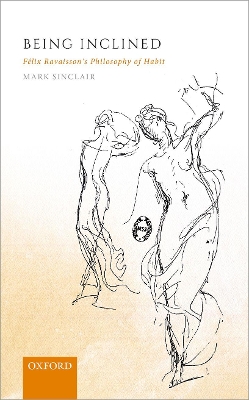 Being Inclined: Felix Ravaisson's Philosophy of Habit is the first English book-length study of the work of Ravaisson, France's most influential philosopher in the second half of the nineteenth-century. Mark Sinclair shows how Ravaisson, in Of Habit (1838), understands habit as tendency and inclination in a way that provides the basis for a philosophy of nature and a general metaphysics. In examining Ravaisson's ideas against the
background of the history of philosophy, and in the light of later developments in French thought, Sinclair shows how Ravaisson accounts for the nature of habit as inclination in an original manner, and within a metaphysical framework
quite different to those of his predecessors in the philosophical tradition. Being Inclined sheds new light on the history of modern French philosophy and argues for the importance of the neglected nineteenth-century French spiritualist tradition. It also shows that Ravaisson's philosophy of inclination, of being-inclined, is of great import for contemporary philosophy, and particularly for the contemporary metaphysics of powers given that ideas about tendency have recently come to prominence
in discussions concerning dispositions, laws, and the nature of causation. Being Inclined therefore offers a detailed and faithful contextualist study of Ravaisson's masterpiece, demonstrating its
continued importance for contemporary thought.

» Have you read this book? We'd like to know what you think about it - write a review about Being Inclined: Felix Ravaisson's Philosophy of Habit book by Mark Sinclair and you'll earn 50c in Boomerang Bucks loyalty dollars (you must be a Boomerang Books Account Holder - it's free to sign up and there are great benefits!)


A Preview for this title is currently not available.
More Books By Mark Sinclair
View All