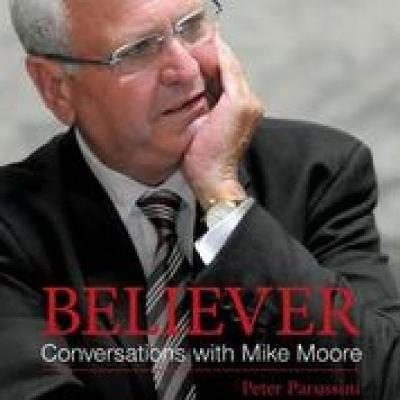 Michael Kenneth Moore was probably New Zealand's last working-class Prime Minister and while the book is inevitably political, it is also a remarkable New Zealand story about an ordinary kiwi achieving extraordinary things. This book is based on conversations held with Mike Moore over the past 12 months and reflections on his life and career involving people who were part of it. The chapters focus on key moments in his life growing up partially crippled in poverty in rural Northland, moving to Auckland and becoming a trade unionist and New Zealand's youngest MP, losing his seat and fighting the Labour Party to get another one only to be diagnosed with cancer, helping make David Lange Prime Minister and beating Muldoon, the turmoil of the fourth Labour Government including becoming Prime Minister for only 59 days, taking Labour to within two seats of Government and being cruelling deposed as leader by Helen Clark in 1993, the years in wilderness when he came close to setting up a new party and not participating in a coup against Clark, his audacious campaign to become Director General of the World Trade Organisation, becoming New Zealand's Ambassador to the US and the stroke that cut it short, and his hopes for the future. In a country that celebrates sporting success Moore's story is also heroic because he has the same traits of smarts, hard work and determination to achieve at the highest levels despite numerous setbacks that all New Zealanders admire in the successful. Peter Parussini has had more than 30 years of experience in the communications industry, spanning journalism, sports marketing, university lecturing, education, sponsorships, branding, broadcasting, politics and international affairs. He is currently a senior executive within the banking world.

» Have you read this book? We'd like to know what you think about it - write a review about Believer - Conversations with Mike Moore book by Peter Parussini and you'll earn 50c in Boomerang Bucks loyalty dollars (you must be a Boomerang Books Account Holder - it's free to sign up and there are great benefits!)