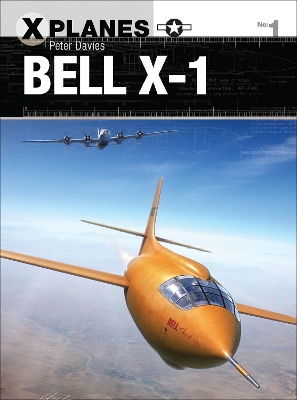 In 1947, no one knew if it was possible to break the 'sound barrier'. The Bell X-1 was the tiny, rocket-powered craft that finally broke it. It was the result of innovative designers and engineers turning their attention from the pioneering jets of World War II to a new task - an aircraft designed purely to fly faster than sound. Legendary pilots rallied to the cause, with World War II ace Chuck Yeager piloting the X-1 when it finally achieved supersonic flight in 1947, the first manned craft to reach such speeds. With historical photographs and meticulously researched digital art, Peter Davies traces the whole career of the pioneering Bell X-1, from its early development through to the influence it had on military and civilian jets in the second half of the 20th century.

» Have you read this book? We'd like to know what you think about it - write a review about Bell X-1 book by Peter E. Davies and you'll earn 50c in Boomerang Bucks loyalty dollars (you must be a Boomerang Books Account Holder - it's free to sign up and there are great benefits!)

Peter E. Davies is a specialist on modern American high-performance aircraft, having written or co-written 26 books including the standard reference work on US Navy and Marine Corps F-4 Phantom II operations. He is based in Bristol, UK. Jim Laurier is a native of New England and lives in New Hampshire. He attended Paier School of Art in Hamden, Connecticut, from 1974-78, and since graduating with Honours, he has been working professionally in the field of Fine Art and Illustration. He has been commissioned to paint for the US Air Force and has aviation paintings on permanent display at the Pentagon. Jim created the cutaway and profile art for this book. Gareth Hector is a digital artist of international standing as well as an aviation history enthusiast. Gareth completed the battlescene artwork and cover artwork for this book.