Beneath The Darkening Sky

Description - Beneath The Darkening Sky by Majok Tulba

A searing new Australian literary talent with a novel combining McCarthy's The Road with Conrad's Heart of Darkness.
When the rebels come to Obinna's village, they do more than wreak terror for one night. Lining the children up in the middle of the village, they measure them against the height of an AK-47. Those who are shorter than the gun are left behind. Those who are taller are taken. Obinna and his older brother Akot find themselves the rebel army's newest recruits.

But while Akot almost willingly surrenders to the training, Obinna resists, determined not to be warped by the revolution's slogans and violence. In the face of his vicious captain's determination to break him, Obinna finds help in a soldier called Priest, and in the power of his own dreams.

Beneath the Darkening Sky describes a life unimaginably different from our own, but one that is the experience of tens of thousands of child soldiers. Uncompromising, vivid and raw, it is an astonishing portrait of a mind trying to make sense of a senseless world.

Majok Tulba himself was shorter than the AK-47, and came to Australia from South Sudan as a refugee in 2001. This is the story of what might have happened to him had he been an inch taller.

'Tulba presents a compelling account of how little humanity has changed since that time; in fact how we may have become worse, resulting in a brilliant novel that will not be easily forgotten.' The Weekend Australian

'Seen through the striking simplicity of a child's eyes, and told through a voice gripping and strong, Majok Tulba's powerful novel resonates long after the last page.' Alice Pung

'It does what great literature can, which is to make something beautiful out of terror and truth. Beneath the Darkening Sky is a meticulous and noble examination of violence and evil, and of how the most innocent people anywhere can be broken and, possibly remade.' Anna Funder

Other Editions - Beneath The Darkening Sky by Majok Tulba 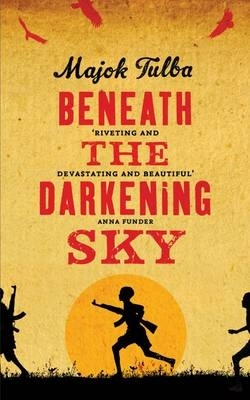 Book Reviews - Beneath The Darkening Sky by Majok Tulba

» Have you read this book? We'd like to know what you think about it - write a review about Beneath The Darkening Sky book by Majok Tulba and you'll earn 50c in Boomerang Bucks loyalty dollars (you must be a Boomerang Books Account Holder - it's free to sign up and there are great benefits!)

Majok Tulba lives in Western Sydney with his wife and children. He is CEO of the charity SudanCare, has had a film as a finalist at Tropfest, and has won a NSW Premier's/CAL Literary Centre Fellowship.

A Preview for this title is currently not available.
More Books By Majok Tulba
View All