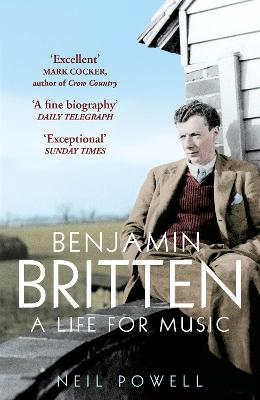 A Life For Music

Benjamin Britten was the greatest English composer of the twentieth century and one of the outstanding musicians of his age.

Born in Lowestoft, Suffolk, in 1913, Britten was the youngest child of a dentist father and amateur musician mother. After studying at the Royal College of Music, he became a vital part of London's creative and intellectual life during the 1930s, collaborating with W. H. Auden and meeting his lifelong partner, the tenor Peter Pears. At the outbreak of the Second World War, Britten and Pears were already in America, earning a precarious living as freelance musicians before re-crossing the Atlantic by ship in the perilous days of 1942.

But the east coast of England was where Britten, as he himself said, belonged- this was where he returned to write his most famous opera, Peter Grimes, and - with Pears and Eric Crozier - to found the Aldeburgh Festival in 1948. In the years that followed, his worldwide reputation grew steadily, helped by a busy schedule of international tours and, for many, crowned by the extraordinary success of his War Requiem. Meanwhile, his festival went from strength to strength, its progress symbolised by the opening of Snape Maltings Concert Hall in 1967.

Britten was a mass of paradoxes- a solitary, introspective thinker who came to ebullient life in the company of young people, for whom he composed some of his most memorable works; a man of the political left who was on the friendliest terms with members of the royal family; a composer inspired by some of the twentieth century's deepest preoccupations who combined innovation with a profound understanding of musical tradition. Devoted to his friends, proteges and fellow musicians, he was, above all, someone who lived for music.

Neil Powell's book is the landmark biography for Britten's centenary year- a subtle and moving portrait of a brilliant, complex and ultimately loveable man.

» Have you read this book? We'd like to know what you think about it - write a review about Benjamin Britten book by Neil Powell and you'll earn 50c in Boomerang Bucks loyalty dollars (you must be a Boomerang Books Account Holder - it's free to sign up and there are great benefits!)

Neil Powell is a poet and biographer who has written extensively on literature and music. His previous books include Roy Fuller- Writer and Society (1995), The Language of Jazz (1997), George Crabbe- An English Life (2004) and Amis & Son- Two Literary Generations (2008), as well as seven collections of poetry, the most recent of which is Proof of Identity (2012). He lives in Suffolk.

A Preview for this title is currently not available.
More Books By Neil Powell
View All