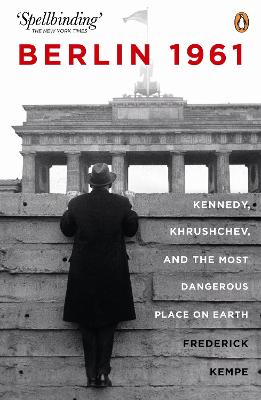 Berlin 1961: Kennedy, Khruschev, and the Most Dangerous Place on Earth

Description - Berlin 1961: Kennedy, Khruschev, and the Most Dangerous Place on Earth by Frederick Kempe

'A mind-shaking work of investigative history' (Wall Street Journal)
Checkpoint Charlie, 27 October 1961. At 9pm on a damp night, the Cold War reaches crisis point. US and Soviet tanks face off across the East-West divide, only yards apart. One mistake, one nervous soldier, could spring the tripwire for nuclear war...
Frederick Kempe's gripping book tells the story of the Cold War's most dramatic year, when Berlin became what Khrushchev called 'the most dangerous place on earth'. Kempe re-creates the war of nerves between the young, untested President Kennedy and the bombastic Soviet leader as they squared off over the future of a divided city. He interweaves this with stories of the ordinary citizens whose lives were torn apart when the Berlin Wall went up - and the world came to the brink of disaster.

Book Reviews - Berlin 1961: Kennedy, Khruschev, and the Most Dangerous Place on Earth by Frederick Kempe

» Have you read this book? We'd like to know what you think about it - write a review about Berlin 1961: Kennedy, Khruschev, and the Most Dangerous Place on Earth book by Frederick Kempe and you'll earn 50c in Boomerang Bucks loyalty dollars (you must be a Boomerang Books Account Holder - it's free to sign up and there are great benefits!)

Frederick Kempe is president and CEO of the Atlantic Council. He previously spent more than twenty-five years as a reporter, columnist and editor for The Wall Street Journal, where he served as chief diplomatic correspondent, Berlin bureau chief and editor and associate publisher of the Journal's Europe edition. His previous three books are Divorcing the Dictator: America's Bungled Affair with Noriega, Siberian Odyssey: A Voyage into the Russian Soul and Father/Land: A Personal Search for the New Germany. He lives in Washington, D.C.

A Preview for this title is currently not available.
More Books By Frederick Kempe
View All