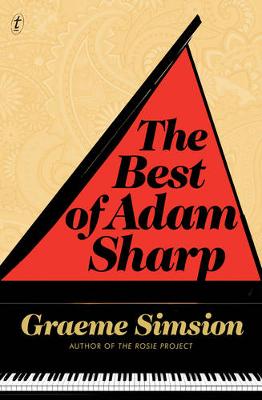 A signed, numbered, limited edition of Graeme Simsion's The Best of Adam Sharp, published in hardback.

A novel about love, music and coming to terms with the past, from the author of the international bestseller The Rosie Project.

On the cusp of fifty, Adam Sharp has a loyal partner, earns a good income as an IT contractor and is the music-trivia expert at quiz nights. It's the lifestyle he wanted, but something's missing.

Two decades ago, on the other side of the world, his part-time piano playing led him into a passionate relationship with Angelina Brown, who'd abandoned law studies to pursue her acting dream. She gave Adam a chance to make it something more than an affair-but he didn't take it. And now he can't shake off his nostalgia for what might have been.

Then, out of nowhere, Angelina gets in touch. What does she want? Does Adam dare to live dangerously? How far will he go for a second chance?

» Have you read this book? We'd like to know what you think about it - write a review about Best of Adam Sharp: Collectors Edition book by Graeme Simsion and you'll earn 50c in Boomerang Bucks loyalty dollars (you must be a Boomerang Books Account Holder - it's free to sign up and there are great benefits!)

Graeme Simsion was born in Auckland and is a Melbourne-based writer of novels, short stories, plays, screenplays and two non-fiction books. The Rosie Project began life as a screenplay, winning the Australian Writers Guild/Inscription Award for Best Romantic Comedy before being adapted into a novel. It went on to win the 2012 Victorian Premier's Literary Award for an unpublished manuscript and has since been sold around the world to over forty countries. Sony Pictures have optioned the film rights with Graeme contracted to write the script. The Rosie Project won the 2014 ABIA for Best General Fiction Book, and was ultimately awarded Australian Book of the Year for 2014. The sequel, The Rosie Effect, was released in 2014 to great acclaim and also became a bestseller. His new book is The Best of Adam Sharp.