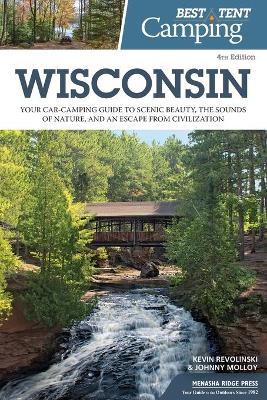 Your Car-Camping Guide to Scenic Beauty, the Sounds of Nature, and an Escape from Civilization 4th Revised edition

The definitive guide to tent camping in the Badger State.

Veteran outdoors writers Kevin Revolinski and Johnny Molloy have teamed up once again to update and improve the now full-color Best Tent Camping: Wisconsin. Camp in the evergreens at Brule River State Forest, then float and fish this famed river near Lake Superior. Or soak in the cool breezes of Lake Michigan at Rock Island. Hike up to a panoramic view in the shadow of the Wisconsin Dells at Devils Lake State Park. Hit the great north woods at Clam Lake.

Let Kevin and Johnny do the research, allowing you to spend your time having fun in Wisconsin's outdoor vacationland. They put their considerable knowledge to work in penning and updating this collaboration that takes the reader to outdoor destinations that will quench their thirst for natural Wisconsin. Entries in this clear and concise guide include an enlightening description of each campground-so you won't have any bad surprises. That way you can find the perfect place to pitch your tent, and then focus on relaxing or indulging in some of the nearby outdoor activities. Ratings for safety, scenery, and security help you make your choices. 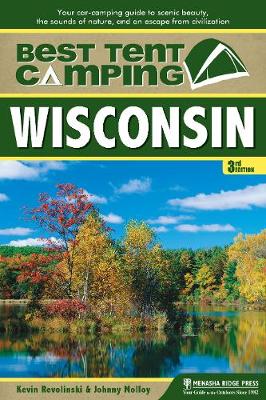 » Have you read this book? We'd like to know what you think about it - write a review about Best Tent Camping: Wisconsin book by Kevin Revolinski and you'll earn 50c in Boomerang Bucks loyalty dollars (you must be a Boomerang Books Account Holder - it's free to sign up and there are great benefits!)

Johnny Molloy is a writer and adventurer based in Johnson City, Tennessee. His outdoor passion was ignited on a backpacking trip in Great Smoky Mountains National Park while attending the University of Tennessee. That first foray unleashed a love of the outdoors that led Johnny to spend more than 4,000 nights backpacking, canoe camping, and tent camping throughout the country over the past three decades. If you put the days of camping all together, that is nearly 11 straight years of camping out. Friends enjoyed his outdoor adventure stories; one even suggested he write a book. He pursued his friend's idea and soon parlayed his love of the outdoors into an occupation. The results of his efforts are more than 60 books and guides. His writings include hiking guidebooks, camping guidebooks, paddling guidebooks, comprehensive guidebooks about a specific area, and true outdoor adventure books covering all or parts of 26 states. Though primarily involved with book publications, Johnny also writes for magazines and websites. Furthermore, he is an outdoors columnist and feature writer for his local paper, the Johnson City Press. He continues writing and traveling extensively throughout the United States, endeavoring in a variety of outdoor pursuits. Johnny is an active member of First Presbyterian Church in Johnson City, Tennessee. He is also a Gideon. His non-outdoor interests include reading, Christian studies, and University of Tennessee sports. For the latest on Johnny, please visit www.johnnymolloy.com. Kevin Revolinski was born and raised in Marshfield, Wisconsin. As a child, he was fascinated by the Northwoods and Lake Superior whenever he visited his grandparents in Ashland. He is also the author of The Yogurt Man Cometh: Tales of an American Teacher in Turkey, 60 Hikes within 60 Miles: Madison, and Wisconsin's Best Beer Guide. He has written for Rough Guides guidebooks, and his articles and photography have appeared in a variety of publications, including Chicago Tribune, Wisconsin State Journal, and The Miami Herald. He has lived abroad in several places, including Italy, Guatemala, and Panama, but he currently makes camp back in the homeland in Madison, Wisconsin. He maintains a travel website at TheMadTravelerOnline.com as well as an accompanying blog at RevTravel.com.

A Preview for this title is currently not available.
More Books By Kevin Revolinski
View All