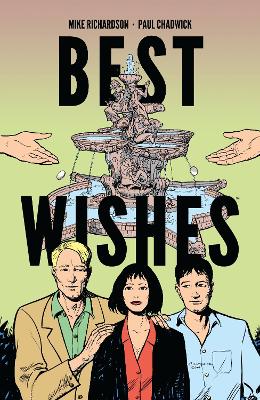 » Have you read this book? We'd like to know what you think about it - write a review about Best Wishes book by Mike Richardson and you'll earn 50c in Boomerang Bucks loyalty dollars (you must be a Boomerang Books Account Holder - it's free to sign up and there are great benefits!)

Mike Richardson is the president and founder of Dark Horse Comics, the award-winning international publishing house he founded in 1986. He is also the president of Dark Horse Entertainment, for which he has produced numerous projects for film and television. In addition to producing films such as R.I.P.D., Hellboy, and Mystery Men, he has also produced films based on several of his own creations, including The Mask and Timecop. Richardson owns a successful pop-culture retail chain, Things From Another World, with stores stretching from Universal's CityWalk in Los Angeles to his hometown in Milwaukie, Oregon. Richardson has written numerous graphic novels and comics series, as well as Comics: Between the Panels and Blast Off!, two critically acclaimed books about pop culture. He lives with his wife, Karie, and their dog in Lake Oswego, Oregon. Paul Chadwick is a writer, artist, and creator of the popular comic book Concrete. Chadwick was educated at the ArtCenter College of Design and soon after began storyboarding for film and television. He is known for his work on Another Chance to Get it Right, Concrete, Eerie, Y: The Last Man, and Dark Horse Presents.