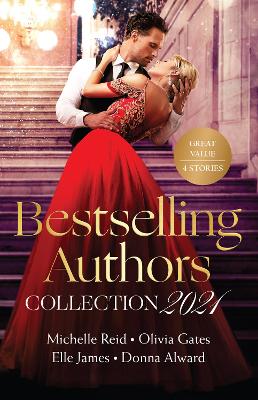 Bestselling Authors Collection 2021/The Price Of A Bride/Billionaire Boss, M.D./Navy SEAL Captive/Secret Millionaire for the Surrogate

Description - Bestselling Authors Collection 2021/The Price Of A Bride/Billionaire Boss, M.D./Navy SEAL Captive/Secret Millionaire for the Surrogate by Donna Alward

The Price Of A Bride - Michelle Reid

When Mia Frazier agrees to her father's demand to marry Greek millionaire Alexander Doumas, she knows both men stand to gain from the deal - Alex will win back his family's island, and Mia's father will get the grandson and heir he so desperately longs for. But Mia has her own reason for agreeing to be Alex's wife - which is not financial gain, as Alex cynically believes. But how can the truth stay hidden, when she shares such intense passion with her new husband...and is now carrying his child?

Rumours swirl around world-famous surgeon Antonio Balducci, who just added Dr Liliana Accardi's research lab to his vast empire. The gorgeous scientist is Antonio's entry into the family he's sworn to destroy. but his manipulations ensnare him. With his soul on fire for the woman he desires above all else, will Antonio's love prove stronger than his hunger for retribution?

Being abducted by a beautiful woman in Cancun wasn't part of Sawyer Houston's R&R mission. Jenna Broyles claims she's rescuing the vacationing Navy SEAL from unknown assailants. Only it's her life on the line when the jilted bride becomes a target. As Jenna and Sawyer flee across treacherous tropical jungles, the heat between them builds to fever pitch. Can they make safe haven before Sawyer's secrets get them both killed?

It's wedding photographer Harper's job to capture other people's happy-ever-afters, but she doesn't believe in one for herself. Until she meets ruggedly gorgeous best man Drew. Having offered to be a surrogate for her best friend, Harper tries to fight their instant chemistry, until Drew sneaks past her defences. But she's about to learn this extraordinary man has an extraordinary secret!

» Have you read this book? We'd like to know what you think about it - write a review about Bestselling Authors Collection 2021/The Price Of A Bride/Billionaire Boss, M.D./Navy SEAL Captive/Secret Millionaire for the Surrogate book by Donna Alward and you'll earn 50c in Boomerang Bucks loyalty dollars (you must be a Boomerang Books Account Holder - it's free to sign up and there are great benefits!)


A Preview for this title is currently not available.
More Books By Donna Alward
View All