Brought to you by Penguin.

Reacher never backs down from a problem.

And he's about to find a big one, on a deserted road in Arizona, where a car has crashed into the only tree for miles around.

Minutes later, Reacher is heading into town. To introduce himself to the shadowy crew who made it happen.

Their boss has a terrifying reputation and the stakes are high. Just to get in and meet him, Reacher is going to have to achieve the impossible.

To get answers will be even harder. There are people in this hostile, empty place who would rather die, than reveal their secrets.

But then, if Reacher is coming after you, you might be better off dead.

Other Editions - Better Off Dead: (Jack Reacher 26) by Lee Child 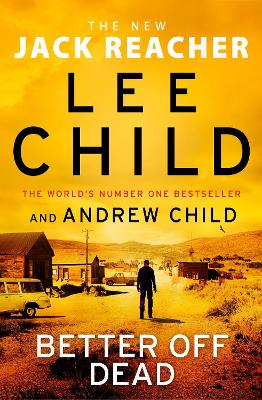 View all editions of Better Off Dead: (Jack Reacher 26) by Lee Child

» Have you read this book? We'd like to know what you think about it - write a review about Better Off Dead: (Jack Reacher 26) book by Lee Child and you'll earn 50c in Boomerang Bucks loyalty dollars (you must be a Boomerang Books Account Holder - it's free to sign up and there are great benefits!)