Description - Better Than You by Trudy Ludwig

Jake's bragging is really starting to get to his neighbor Tyler. Tyler can't show Jake a basketball move, a school assignment, or a new toy without Jake saying he can do better. Tyler starts to wonder- Is something wrong with him? Is he really such a loser? Is Jake really better than him at everything? Or is Jake the one with the problem? With the help of his uncle Kevin, Tyler begins to understand that Jake's bragging has nothing to do with Tyler's own abilities and that puffing yourself up leaves little room for friends.

Other Editions - Better Than You by Trudy Ludwig 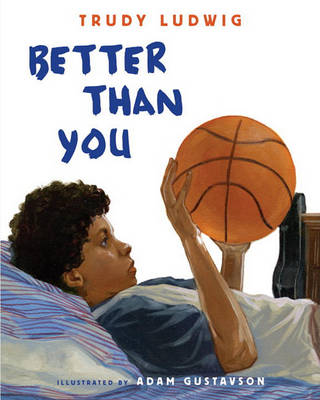 Book Reviews - Better Than You by Trudy Ludwig

» Have you read this book? We'd like to know what you think about it - write a review about Better Than You book by Trudy Ludwig and you'll earn 50c in Boomerang Bucks loyalty dollars (you must be a Boomerang Books Account Holder - it's free to sign up and there are great benefits!)

TRUDY LUDWIG, author of seven books for children, has been profiled on national television, on radio, and in newsprint. An active member of the International Bullying Prevention Association, she is a sought-after speaker who collaborates frequently with organizations like The Ophelia Project, Hands & Words Are Not For Hurting Project, and Putting Family First. Trudy's books have received the Mom's Choice Gold Award, the CCBC's ""Best of the Best"" award, and have been recognized as NCSS-CBC Notable Social Studies Books for Young People. ADAM GUSTAVSON has illustrated more than a dozen picture books, including the award-winning The Yankee at the Seder, also published by Tricycle Press. Accolades for Adam's books include the IRA-CBC Children's Choice, Bank Street Best Books of the Year, and a Sydney Taylor Honor. Adam received an MFA from the School of Visual Arts in New York and has taught illustration at Seton Hall University, The University of the Arts, and Passaic County College.