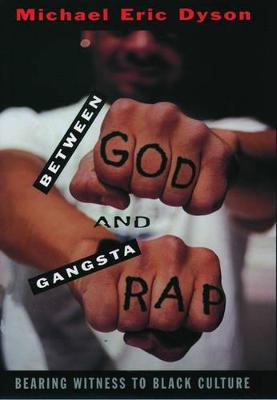 Between God and Gangsta' Rap

Description - Between God and Gangsta' Rap by Michael Eric Dyson

A former welfare father from the ghetto of Detroit, Michael Eric Dyson is today a critic, scholar, and ordained Baptist minister who has forged a unique role: he is a compelling spokesman for the concerns of the black community, and also a leader who has a genuine rapport with that community, particularly with urban youth. In his essays, lectures, sermons, and books, he has emerged as one of the leading African-American voices of our day. Dyson's passion
for contemporary black culture informs Between God and Gangsta' Rap, his latest foray into the ongoing debate about African-American identity which embraces the hopes of the church and the cool reality
of hip-hop. Bringing together writings on music, religion, politics, and identity, and offering a multi-faceted view of black life, the book charts the progress of Dyson's own soul, from his roots in the Detroit ghetto, to his current status as a Baptist minister, professor, cultural critic, husband, and father. Dyson opens with a letter to his brother, who is serving life in prison on a murder charge. This painful piece reveals a violence in the author's own family that sets the tone for
themes that will emerge throughout these writings: violence on the black body and soul; the redemptive power of hope through school, church, and family; sexuality as a source of anguish and of joy; and the
struggle with entrenched white racism. There is a section of wonderful profiles Dyson calls "Testimonials"--studies of black men, from O.J. Simpson to Marion Barry, and from Baptist preacher Gardner Taylor to Michael Jordan and Sam Cooke. In "Obsessed with O.J.," Dyson offers an extremely personal and insightful series of reflections on the case. In "Lessons," Dyson takes up the subjects of politics and racial identity. Newt Gingrich and moral panic, Quabiliah Shabazz, Carol Moseley Braun, the
NAACP, Martin Luther King, Jr., and Malcolm X all figure in these insightful and accessible pieces. And "Songs of Celebration" draws from Dyson's writings for the popular press such as Rolling Stone
and Vibe, and explores the joys and pitfalls of black expression, from the black vernacular bible to gospel music, R & B, and hip-hop. Dyson concludes with an essay framed as a letter to his wife, which offers a positive counterbalance to the opening address to his brother. The letter serves as a tribute to the redemptive powers of love, the black family, spirit, and change. Arguing that the richness of black culture today can be found in the interstices--between god
and gangsta' rap--Dyson charts the progress and pain of African Americans over the past decade, showing that brilliance and beauty, pain and drudgery are components of this changing culture. As a compendium of his
thinking about contemporary culture Between God and Gangsta' Rap will find a wide audience among black and white readers.

» Have you read this book? We'd like to know what you think about it - write a review about Between God and Gangsta' Rap book by Michael Eric Dyson and you'll earn 50c in Boomerang Bucks loyalty dollars (you must be a Boomerang Books Account Holder - it's free to sign up and there are great benefits!)

About the Author: Michael Eric Dyson is an ordained Baptist minister, Director of the Institute of African-American Research, and Professor of Communication Studies at the University of North Carolina, Chapel Hill. He is the author of the widely acclaimed Reflecting Black: African-American Cultural Criticism, and Making Malcolm: The Myth and Meaning of Malcolm X. His most recent publication is race Rules: Navigating the Color Line.