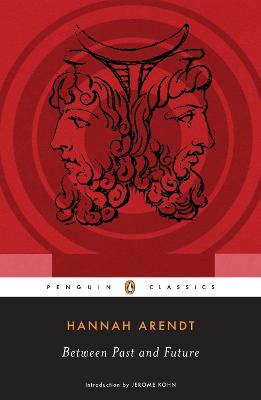 Between Past and Future

Description - Between Past and Future by Hannah Arendt

From the author of Eichmann in Jerusalem and The Origins of Totalitarianism, "a book to think with through the political impasses and cultural confusions of our day" (Harper's Magazine)

Hannah Arendt's insightful observations of the modern world, based on a profound knowledge of the past, constitute an impassioned contribution to political philosophy. In Between Past and Future Arendt describes the perplexing crises modern society faces as a result of the loss of meaning of the traditional key words of politics- justice, reason, responsibility, virtue, and glory. Through a series of eight exercises, she shows how we can redistill the vital essence of these concepts and use them to regain a frame of reference for the future. To participate in these exercises is to associate, in action, with one of the most original and fruitful minds of the twentieth century.

Buy Between Past and Future by Hannah Arendt from Australia's Online Independent Bookstore, Boomerang Books.

Book Reviews - Between Past and Future by Hannah Arendt

» Have you read this book? We'd like to know what you think about it - write a review about Between Past and Future book by Hannah Arendt and you'll earn 50c in Boomerang Bucks loyalty dollars (you must be a Boomerang Books Account Holder - it's free to sign up and there are great benefits!)

Hannah Arendt (1906-1975) was University Professor of political philosophy in the graduate Faculty of the New School for Social Research, a visiting professor at several universities including California, Princeton, Columbia, and Chicago, a research director of the Conference on Jewish Relations, the chief editor of Schocken Books, and the executive director of Jewish Cultural Reconstruction in New York City. She was awarded a Guggenheim Fellowship in 1952, and an Arts and Letters Grant of the National Institute of Arts and Letters in 1954. She is also the author of On Revolution and Eichmann in Jerusalem, which are available from Penguin Classics along with The Portable Hannah Arendt. Jerome Kohn, who was Hannah Arendt's last teaching and research assistant, is the director of the Hannah Arendt Center at the Graduate Faculty of the New School for Social Research and the trustee of the Hannah Arendt Bluecher Literary Trust. His editions of Hannah Arendt's unpublished and uncollected writings include Essays in Understanding 1930-1954, Responsibility and Judgment, The Promise of Politics, and, with Ron Feldman, The Jewish Writings of Hannah Arendt.

A Preview for this title is currently not available.
More Books By Hannah Arendt
View All