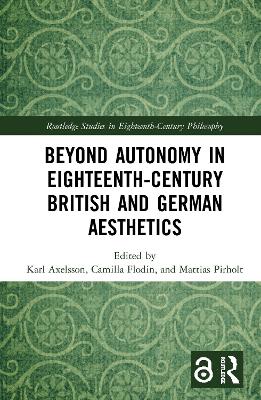 Beyond Autonomy in Eighteenth-Century British and German Aesthetics

This volume re-examines traditional interpretations of the rise of modern aesthetics in eighteenth-century Britain and Germany. It provides a new account that connects aesthetic experience with morality, science, and political society. In doing so, it challenges long-standing teleological narratives that emphasize disinterestedness and the separation of aesthetics from moral, cognitive, and political interests.

The chapters are divided into three thematic parts. The chapters in Part I demonstrate the heteronomy of eighteenth-century British aesthetics. They chart the evolution of aesthetic concepts and discuss the ethical and political significance of the aesthetic theories of several key figures: namely, the third Earl of Shaftesbury, David Hume, and Adam Smith. Part II explores the ways in which eighteenth-century German, and German-oriented, thinkers examine aesthetic experience and moral concerns, and relate to the work of their British counterparts. The chapters here cover the work of Kant, Moses Mendelssohn, Alexander Gottlieb Baumgarten, and Madame de Stael. Finally, Part III explores the interrelation of science, aesthetics, and a new model of society in the work of Goethe, Johann Wilhelm Ritter, Friedrich Hoelderlin, and William Hazlitt, among others.

This volume develops unique discussions of the rise of aesthetic autonomy in the eighteenth century. In bringing together well-known scholars working on British and German eighteenth-century aesthetics, philosophy, and literature, it will appeal to scholars and advanced students in a range of disciplines who are interested in this topic.

» Have you read this book? We'd like to know what you think about it - write a review about Beyond Autonomy in Eighteenth-Century British and German Aesthetics book by Karl Axelsson and you'll earn 50c in Boomerang Bucks loyalty dollars (you must be a Boomerang Books Account Holder - it's free to sign up and there are great benefits!)


A Preview for this title is currently not available.
More Books By Karl Axelsson
View All

Political Aesthetics: Addison and Shaftesbury on Taste, Morals and Society
$162.00 $180.00