Rethinking Time, Space, Consciousness, and the Illusion of Death

Description - Beyond Biocentrism by Robert Lanza

Acclaimed biologist Robert Lanza, one of TIME Magazine's "100 Most Influential People in 2014," and leading astronomer Bob Berman, take the reader on an intellectual thrill-ride as they re-examine everything we thought we knew about life, death, the universe, and the nature of reality itself.

The biocentrism theory isn't a rejection of science. Quite the opposite. Biocentrism challenges us to fully accept the implications of the latest scientific findings in fields ranging from plant biology and cosmology to quantum entanglement and consciousness.

Other Editions - Beyond Biocentrism by Robert Lanza 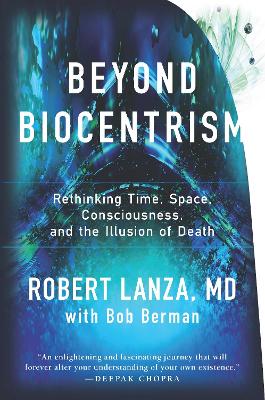 » Have you read this book? We'd like to know what you think about it - write a review about Beyond Biocentrism book by Robert Lanza and you'll earn 50c in Boomerang Bucks loyalty dollars (you must be a Boomerang Books Account Holder - it's free to sign up and there are great benefits!)

Robert Lanza, MD is one of the most respected scientists in the world--a U.S. News & World Report cover story called him a "genius" and "renegade thinker," even likening him to Einstein. Lanza is head of Astellas Global Regenerative Medicine, Ocata Chief Scientific Officer, and adjunct professor at Wake Forest University School of Medicine. He was recognized by Time magazine in 2014 on its list of the "100 Most Influential People in the World." Prospect magazine named him one of the Top 50 "World Thinkers" in 2015. He is credited with several hundred publications and inventions, and over thirty scientific books, including the definitive references in the field of stem cells and regenerative medicine. A former Fulbright Scholar, he studied with polio pioneer Jonas Salk and Nobel Laureates Gerald Edelman and Rodney Porter. He also worked closely (and coauthored a series of papers) with noted Harvard psychologist B. F. Skinner and heart transplant pioneer Christiaan Barnard. Dr. Lanza received his undergraduate and medical degrees from the University of Pennsylvania, where he was both a University Scholar and Benjamin Franklin Scholar. Lanza was part of the team that cloned the world's first human embryo, as well as the first to successfully generate stem cells from adults using somatic-cell nuclear transfer (therapeutic cloning). In 2001 he was also the first to clone an endangered species, and recently published the first-ever report of pluripotent stem cell use in humans. Bob Berman is the longtime science editor of the Old Farmer's Almanac, and contributing editor of Astronomy magazine, formerly with Discover from 1989 to 2006. He produces and narrates the weekly Strange Universe segment on WAMC Northeast Public Radio, heard in eight states, and has been a guest on such TV shows as Late Night with David Letterman. He taught physics and astronomy at New York's Marymount College in the 1990s, and is the author of eight popular books. His newest is Zoom: How Everything Moves (2014, Little Brown).

A Preview for this title is currently not available.
More Books By Robert Lanza
View All