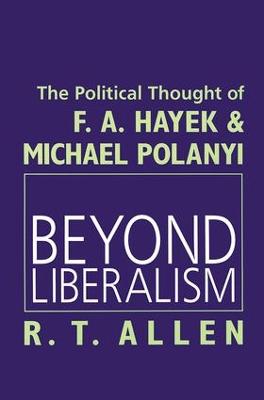 In Beyond Nihilism, Michael Polanyi argued that a merely "negative" liberty of doing as one pleases so long as one does not impinge upon the equal liberty of others - must and has led to destructive nihilism and a fierce reaction to collectivism. R.T. Allen takes up this argument in Beyond Liberalism, and shows how Polanyi's political philosophy evolved into a more "positive" and distinctly conservative concept of liberty, converging upon the archetypal conservatism of Edmund Burke. Allen examines Polanyi's and F.A. Hayek's thinking with respect to the nature, value, and foundations of liberty.Negative and positive liberties are two sides of one liberty, and Allen believes negative conceptions of liberty are as dangerous as positive ones. He distinguishes among general and abstract definitions of liberty and shows how all, including that of Hayek, ultimately dissolve. According to Allen, only tacit conceptions of liberty, such as those of Burke and Polanyi, prove viable. This is because they rest on concrete tradition. Allen examines how the skeptical, rationalist, and utilitarian philosophies of Ludwig von Mises and Sir Karl Popper fail to support the value of liberty and even proved to be destructive of it. Allen argues that society cannot rely upon the classically liberal notion of contract but rather upon prescriptive and inherited obligations. In turn, this means that citizens have positive, as well as negative, duties to each other and the body politic of which they are part and upon whose support liberty depends.A free society is held together by emotional bonds and the traditions and rituals that sustain them. A free society also presupposes that the individual has inherent value in and for himself. For R.T. Allen, only Christianity, and certainly no modern philosophy, has a conception of the unique individual and his irreplaceable value and of a political order that transcends itself into the moral order. Even Polanyi's liberty is ultimately insufficient, for it gives no inherent value to the person himself but instead to the ideals which he serves. Beyond Liberalism challenges deeply ingrained notions of liberty and its meaning in modern society. It is a call for traditions of self-restraint and justice for their own sakes. This noteworthy volume is an essential addition to the libraries of political scientists, philosophers, and theologians alike.

Other Editions - Beyond Liberalism by R. T. Allen 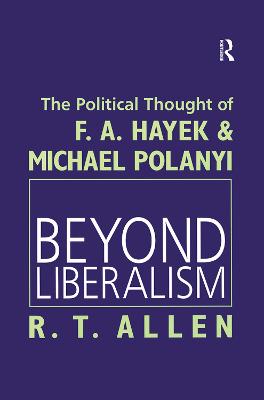 » Have you read this book? We'd like to know what you think about it - write a review about Beyond Liberalism book by R. T. Allen and you'll earn 50c in Boomerang Bucks loyalty dollars (you must be a Boomerang Books Account Holder - it's free to sign up and there are great benefits!)


A Preview for this title is currently not available.
More Books By R. T. Allen
View All