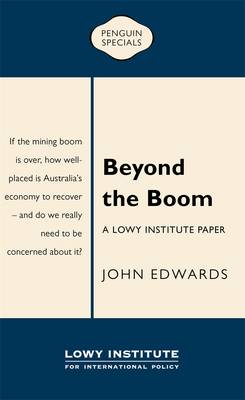 Description - Beyond the Boom by John Edwards

In a striking analysis, economist John Edwards challenges the prevailing pessimism. Cutting through the confusion, Edwards shows that the mining boom is far from over - and that it hasn't been as important for Australian prosperity as widely believed. We have a bright future in the world, and the economy is well configured to get us there. The bright future won't be in what we dig, though. It will be in what we grow, what we make and, above all, in the services we provide.

'Edwards' book is a rollicking read. He nails his colours to the mast, cherry picks the data and imposes his own clear interpretation on economic developments and reform options. It should provide the basis of reasoned debate on a very important topic - how Australia can enjoy ongoing economic prosperity on a sustainable and equitable basis.' The Lowy Interpreter

' Throws a large rock into the pond of what has become conventional wisdom. . . Edwards' intervention into the debate is an important one, and adds to a far older contest of views.' Australian Financial Review

'Edwards is right to highlight the diverse strengths of the Australian economy.' The Australian

Book Reviews - Beyond the Boom by John Edwards

» Have you read this book? We'd like to know what you think about it - write a review about Beyond the Boom book by John Edwards and you'll earn 50c in Boomerang Bucks loyalty dollars (you must be a Boomerang Books Account Holder - it's free to sign up and there are great benefits!)

John Edwards is a member of the board of the Reserve Bank of Australia and Nonresident Fellow at the Lowy Institute. He is also an adjunct professor at both the University of Sydney School of Business and the John Curtin Institute of Public Policy at Curtin University. For many years Dr Edwards was the Chief Economist for HSBC Bank in Australia and New Zealand. He was formerly senior economic adviser for Treasurer and then Prime Minister Paul Keating. His account of the former Prime Minister, Keating- The inside story, published by Penguin, was a bestseller.

How to Deliver a TED Talk: Secrets of the World's Most Inspiring Presentations, revised and expanded new edition, with a foreword by Richard St. John and an afterword by Simon Sinek
Jeremey Donovan
$37.57 $37.95
More Books By John Edwards
View All

The Preacher. a Discourse, Shewing, What Are the Particular Offices and Employments of Those of That Character in the Church. ... by John Edwards, D.D.
$78.80 $87.55