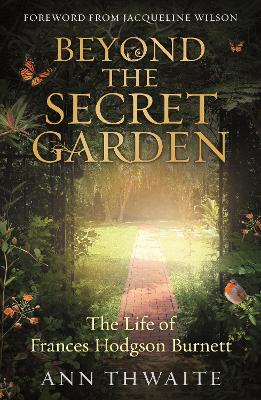 Beyond the Secret Garden: The Life of Frances Hodgson Burnett (with a Foreword by Jacqueline Wilson)

Description - Beyond the Secret Garden: The Life of Frances Hodgson Burnett (with a Foreword by Jacqueline Wilson) by Ann Thwaite

The definitive and revealing biography of the author of The Secret Garden. Frances Hodgson Burnett's favourite theme in her fiction was the reversal of fortune, and she herself knew extremes of poverty and wealth. Born in Manchester in 1849, she emmigrated with her family to Tennessee because of the financial problems caused by the cotton famine. From a young age she published her stories to help the family make ends meet. Only after she married did she publish Little Lord Fauntleroy that shot her into literary stardom. On the surface, Frances' life was extremely successful: hosting regular literary salons in her home and travelling frequently between properties in the UK and America. But behind the colourful personal and social life, she was a complex and contradictory character. She lost both parents by her twenty-first birthday, Henry James called her "the most heavenly of women" although avoided her; prominent people admired her and there were many friendships as well as an ill-advised marriage to a much younger man that ended in heartache. Her success was punctuated by periods of depression, in one instance brought on by the tragic loss of her eldest son to consumption. Ann Thwaite creates a sympathetic but balanced and eye-opening biography of the woman who has enchanted numerous generations of children. AUTHOR: Dr Ann Thwaite is a writer and occasional reviewer for publications such as Guardian, Telegraph and The Times. She was born in London and educated at Oxford. She has written five major, critically acclaimed biographies. Her biography AA Milne won the Whitbread Biography of the Year prize. Dr Thwaite is a member of the Royal Society of Authors, the Royal Over-Seas League, and the Children's Books History Society.

Buy Beyond the Secret Garden: The Life of Frances Hodgson Burnett (with a Foreword by Jacqueline Wilson) by Ann Thwaite from Australia's Online Independent Bookstore, Boomerang Books.

Book Reviews - Beyond the Secret Garden: The Life of Frances Hodgson Burnett (with a Foreword by Jacqueline Wilson) by Ann Thwaite

» Have you read this book? We'd like to know what you think about it - write a review about Beyond the Secret Garden: The Life of Frances Hodgson Burnett (with a Foreword by Jacqueline Wilson) book by Ann Thwaite and you'll earn 50c in Boomerang Bucks loyalty dollars (you must be a Boomerang Books Account Holder - it's free to sign up and there are great benefits!)


A Preview for this title is currently not available.
More Books By Ann Thwaite
View All