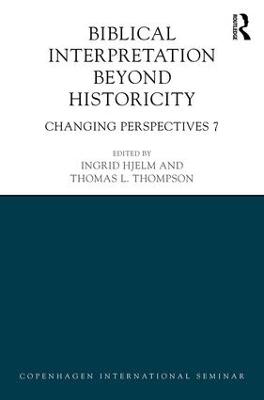 Biblical Interpretation beyond Historicity evaluates the new perspectives that have emerged since the crisis over historicity in the 1970s and 80s in the field of biblical scholarship. Several new studies in the field, as well as the 'deconstructive' side of literary criticism that emerged from writers such as Derrida and Wittgenstein, among others, lead biblical scholars today to view the texts of the Bible more as literary narratives than as sources for a history of Israel. Increased interest in archaeological and anthropological studies in writing the history of Palestine and the ancient Near East leads to the need for an evidence-based history of Palestine.

This volume analyses the consequences of the question: "If the Bible is not history, what is it then?" The editors, Hjelm and Thompson are members of the Copenhagen School, which was formed in the light of this question and the commitment to a new approach to both the history of Palestine and the Bible's place in ancient history. This volume features essays from a range of highly regarded scholars, and is divided into three sections: "Beyond Historicity", which explores alternative historical roles for the Bible, "Greek Connections", which discusses the Bible's context in the Hellenistic world and "Reception", which explores extra-biblical functions of biblical studies.

Offering a unique gathering of scholars and challenging new theories, Biblical Interpretation beyond Historicity is invaluable to students in the field of Biblical and East Mediterranean Studies, and is a crucial resource for anyone working on both the archaeology and history of Palestine and the ancient Near East, and the religious development of Europe and the Near East.

Other Editions - Biblical Interpretation Beyond Historicity by Ingrid Hjelm 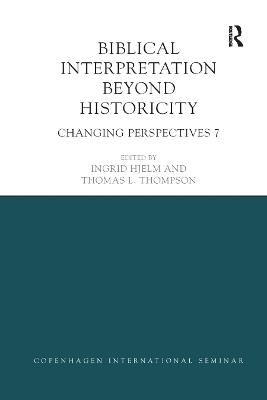 » Have you read this book? We'd like to know what you think about it - write a review about Biblical Interpretation Beyond Historicity book by Ingrid Hjelm and you'll earn 50c in Boomerang Bucks loyalty dollars (you must be a Boomerang Books Account Holder - it's free to sign up and there are great benefits!)

Ingrid Hjelm, Associate Professor at the University of Copenhagen and Director of the Palestine History and Heritage Project. Author of The Samaritans and Early Judaism (2000) and Jerusalem's Rise to Sovereignty (2004) in addition to a considerable number of articles within the field of Samaritan studies, the history of ancient Israel and the Hebrew Bible. Her latest book, co-edited with Anne Katrine de Hemmer Gudme is Myths of Exile (2015). Thomas L. Thompson, Professor Emeritus, University of Copenhagen and author of some 130 articles and ca. 20 books, including The Historicity of the Patriarchal Narratives (1974), The Early History of the Israelite People (1992), The Bible in History: How Writers Create a Past (1999) and Biblical Narrative and Palestine's History (2013), currently working as Project Developer on the Palestine History and Heritage Project.

A Preview for this title is currently not available.
More Books By Ingrid Hjelm
View All

A New Critical Approach to the History of Palestine: Palestine History and Heritage Project 1
$249.48 $252.00