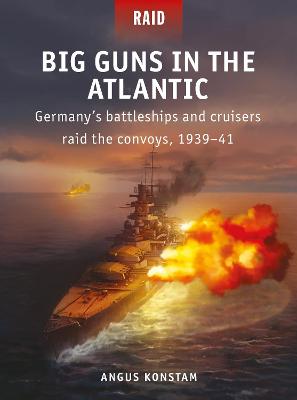 Big Guns in the Atlantic: Germany's battleships and cruisers raid the convoys, 1939-41

Description - Big Guns in the Atlantic: Germany's battleships and cruisers raid the convoys, 1939-41 by Angus Konstam

At the outbreak of World War II the German Kriegsmarine still had a relatively small U-boat arm. To reach Britain's convoy routes in the North Atlantic, these boats had to pass around the top of the British Isles - a long and dangerous voyage to their "hunting grounds". Germany's larger surface warships were much better suited to this kind of long-range operation. So, during late 1939 the armoured cruiser Deutschland, and later the battlecruisers Scharnhorst and Gneisenau were used as commerce raiders, to strike at Allied convoys in the North Atlantic. These sorties met with mixed results, but for Germany's naval high command they showed that this kind of operation had potential. Then, the fall of France, Denmark and Norway in early 1940 dramatically altered the strategic situation. The Atlantic was now far easier to reach, and to escape from.

During 1940, further moderately successful sorties were made by the cruisers Admiral Scheer and Admiral Hipper. By the end of the year, with British mercantile losses mounting to surface raiders and U-Boats, plans were developed for a much larger raid, first using both cruisers, and then the two battlecruisers. The climax of this was Operation Berlin, the Kriegsmarine's largest and most wide-ranging North Atlantic sortie so far. Scharnhorst and Gneisenau remained at sea for two months, destroying 22 Allied merchant ships, and severely disrupting Britain's lifeline convoys. So, when the operation ended, the German commander, Admiral Lutjens was ordered to repeat his success - this time with the brand new battleship Bismarck. The rest, as they say, is history. These earlier Atlantic raids demonstrated that German surface ships could be highly effective commerce raiders. For those willing to see though, they also demonstrated just how risky this strategy could be. Covering a fascinating and detailed analysis of the Kriegsmarine's Atlantic raids between 1939 and 1941, this book will appeal to readers interested in World War II and in particular in Germany's naval operations.

» Have you read this book? We'd like to know what you think about it - write a review about Big Guns in the Atlantic: Germany's battleships and cruisers raid the convoys, 1939-41 book by Angus Konstam and you'll earn 50c in Boomerang Bucks loyalty dollars (you must be a Boomerang Books Account Holder - it's free to sign up and there are great benefits!)