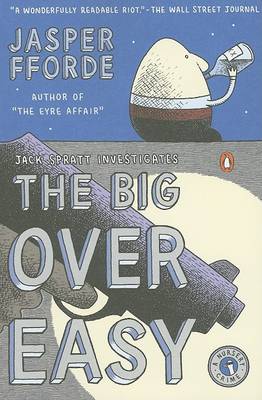 The Big Over Easy

Description - The Big Over Easy by Jasper Fforde

When D-class nursery celebrity Humpty Stuyvesant Van Dumpty III, is found shattered to death, all the evidence points to his ex-wife, who has conveniently shot herself. But Detective Inspector Jack Spratt and his assistant Mary Mary remain unconvinced.

Other Editions - The Big Over Easy by Jasper Fforde Book Reviews - The Big Over Easy by Jasper Fforde

» Have you read this book? We'd like to know what you think about it - write a review about Big Over Easy book by Jasper Fforde and you'll earn 50c in Boomerang Bucks loyalty dollars (you must be a Boomerang Books Account Holder - it's free to sign up and there are great benefits!)

The Big Over Easy is the first in the Nursery Crime series by Jasper Fforde and, while it was not published until 2005, it was actually written in 1994, well before his highly successful Thursday Next series. It is a reworking of his first written novel which was initially titled “Who Killed Humpty Dumpty”, and is set in a similar alternative universe to the Thursday Next novels; the main characters, DI Jack Spratt, DS Mary Mary, Dr. Gladys Singh and others appear in “The Well of Lost Plots”. Spratt’s boss, Superintendent Briggs tells DS Mary, when she transfers from Basingstoke to Reading Division, hoping to work with the legendary DCI Friedland Chymes: “Modern policing isn’t about catching criminals, Mary. It’s about good copy and ensuring cases can be made into top-notch documentaries on the telly.” (not too much of a stretch from real life….). To her disappointment, Mary is assigned to assist DI Jack Spratt in the Nursery Crime Division which deals with any crime involving nursery characters or plots from poems or stories. The NCD team consists of DI Jack Spratt, DS Mary Mary, Sergeant Charlie Baker (the station hypochondriac), Constable Otto Tibbit, Constable the Baroness Gretel Leibnitz von Kandlestyk-Maeker (forensic accounting expert) and Constable Ashley (blue-skinned alien and computer expert), all sharing two tiny rooms since 1978, with welcome input from Dr Gladys Singh (pathologist). The story opens with Spratt and Mary investigating Humpty Dumpty’s fall from a wall and subsequent death. Fforde gives the reader a truly original plot with lots of mystery contrivances including the Locked Room, Identical Twins, Red Herring, Least Likely Suspect and Overlooked Clue, plenty of irony and some worthy puns, and reminds the reader just how much violence there is in Nursery Rhymes and Fairy Tales. Fforde’s main character is happily married to Madeleine with 5 kids & Prometheus as lodger in the spare room, OR a chain-smoking vintage-Rolls-Royce driving divorced alcoholic with an inability to form long-lasting relationships, a love of Puccini, Henry Moore and Magritte (according to his Guild of Detectives application form). Whilst trying to solve the case, Jack is also woven into several other nursery rhymes and tales including, obviously, Jack Spratt, Jack the Giant Killer and Jack and the Beanstalk. With each Jasper Fforde book, I look forward to the smorgasbord of hilarious, occasionally ludicrous names that Fforde’s rich imagination throws up: journalists Joshua Hatchett, Archibald Fatquack, Hector Sleaze and Clifford Sensible; detectives Inspector Moose, Hercule Porridge and Miss Maple from St Michael Mead; Giorgio Porgia, William Winkie, Tom Thomm (the flautist’s son), Incomprehensible Greene (landscaper), Seymour Weevil, DCI Bestbeloved, Mr & Mrs Sittkomm. Winsum & Loosum Pharmaceuticals, and Spongg footcare. Fforde also treats the reader to occasional gems like: “She opened the door…..letting out a stream of cats that ran around with such rapidity and randomness of motion that they assumed a liquid state of furry purringness.” I found this book thoroughly enjoyable and I look forward to the second in this series, The Fourth Bear.

Jasper Fforde traded a varied career in the film industry for staring vacantly out of the window and arranging words on a page. He lives and writes in Wales. The Eyre Affair was his first novel in the bestselling "Thursday Next" series. He is also the author of the "Nursery Crime" series.

A Preview for this title is currently not available.
More Books By Jasper Fforde
View All

Early Riser: The standalone novel from the Number One bestselling author
Available, ships in 7-10 business days
$16.99 $19.99