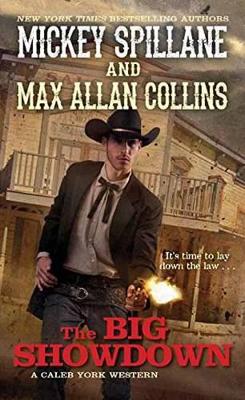 They killed the new sheriff.
Now they'll have to deal with Caleb York...

Times are changing. Caleb York is saddling up to try his hand as a Pinkerton man outCalifornia way. But before he can leave Trinidad, New Mexico, a peaceful morning erupts in a barrage of gunfire. When the dust settles, Caleb has gunned down twobad men,with another just dodginga ticket to hell . . . but leaving one verygood manlying dead in the street.

Lightning quick, Calebrides after the fleeing gunman, only to be swept up in an evil wind blowing backthrough the sleepy town, threatening its very existence. Caleb's only chance to restore justice is to load his guns, dig in his spurs, andtake ona ruthless killer. In a town drowning in blood, riddled with bullets, and hoping for a hero, Caleb York is the right man at the right time-ready to face the vengeful outlaws ina chilling, storm-swept showdown.

"Spillane is a master in compelling you to always turn the next page."-The New York Times

Other Editions - The Big Showdown by Mickey Spillane » Have you read this book? We'd like to know what you think about it - write a review about Big Showdown book by Mickey Spillane and you'll earn 50c in Boomerang Bucks loyalty dollars (you must be a Boomerang Books Account Holder - it's free to sign up and there are great benefits!)

Mickey Spillane is the legendary crime writer credited with igniting the explosion of paperback publishing after World War II through the unprecedented success of his Mike Hammer novels. Spillane's novels sold tens of millions of copies.aI, The Juryawent through more than 60 paperback printings in 1947 alone. In 1995, he was named a Grand Master by the Mystery Writers of America. Before his death at the age of 88 in 2006, Spillane chose long-time friend Max Allan Collins to complete his unfinished works and act as his literary executor.a a Max Allan Collins is the New York Times bestselling, award-winning author ofaRoad to Perdition, the graphic novel that inspired the Oscar-winning movie starring Paul Newman and Tom Hanks. Also a filmmaker, Collins created the documentary Mike Hammer's Mickey Spillane. He lives in Iowa. a For more information about the Caleb York westerns by Mickey Spillane and Max Allan Collins, visit www.maxallancollins.com.

A Preview for this title is currently not available.
More Books By Mickey Spillane
View All