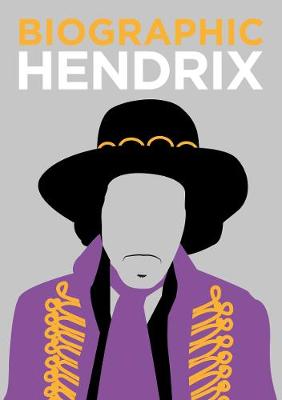 The Biographic series presents an entirely new way of looking at the lives of the world's greatest thinkers and creatives. It takes the 50 defining facts, dates, thoughts, habits and achievements of each subject, and uses infographics to convey all of them in vivid snapshots. Each Biographic title is designed to be as entertaining as it is informative. Timelines not only pinpoint significant dates, but set them in the context and culture of their times. Dynamic maps locate biographical events alongside other points of interest. Character traits are illuminated by visual comparisons. Many people know that Jimi Hendrix (1942 1970) was a pioneering guitarist and songwriter whose electric playing and performances were at the heart of Sixties pop culture. What, perhaps, they don't know is that he trained as a paratrooper in the US Army; that his first guitar cost only $5, while the guitar he set light to at the Monterey Pop Festival later sold for $380,000; that the Jimi Hendrix Experience recorded only 3 studio albums; and that he is one of many rock stars to have died at the age of 27. Biographic: Hendrix presents an instant impression of his life, work and fame, with an array of irresistible facts and figures converted into infographics to reveal the artist behind the music.

» Have you read this book? We'd like to know what you think about it - write a review about Biographic: Hendrix book by Liz Flavell and you'll earn 50c in Boomerang Bucks loyalty dollars (you must be a Boomerang Books Account Holder - it's free to sign up and there are great benefits!)


A Preview for this title is currently not available.
More Books By Liz Flavell
View All

Preparing to Include Special Children in Mainstream Schools
$44.09 $48.99