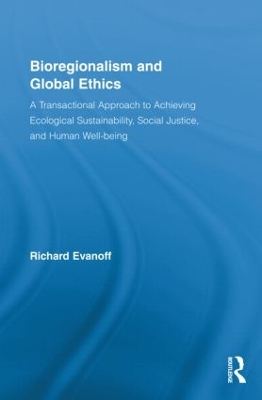 Bioregionalism and Global Ethics suggests that current trends towards globalization are creating entirely new social and environmental problems which require cross-cultural dialogue towards the creation of a new "global ethic." Current models of development are based on an implicit global ethic which advocates bringing everyone in the world up to the same standards of living as those prevalent in the so-called "developed" countries through unlimited economic growth. Evanoff argues that this goal is not only unattainable but also undesirable because it ultimately undermines the ability of the environment to sustain both human and non-human flourishing, exacerbates rather than overcomes social inequalities both within and between cultures, and fails to achieve genuine human well-being for all but a wealthy minority. An alternative bioregional global ethic is proposed which seeks to maximize ecological sustainability, social justice, and human well-being through the creation of economically self-sufficient and politically decentralized communities delinked from the global market but confederated at appropriate levels to address problems that transcend cultural borders. Such an ethic is based on a transactional view of the relationship between self, society, and nature, which attempts to create more symbiotic and less conflictual modes of interaction between human cultures and natural environments, while promoting the flourishing of both. Instead of a single monolithic global ethic, bioregionalism suggests that there should be sufficient convergence between cultures to allow for the successful resolution of mutual problems, but also sufficient divergence to enable the continued evolution of both biological and cultural diversity on a global scale.

Other Editions - Bioregionalism and Global Ethics by Richard Evanoff » Have you read this book? We'd like to know what you think about it - write a review about Bioregionalism and Global Ethics book by Richard Evanoff and you'll earn 50c in Boomerang Bucks loyalty dollars (you must be a Boomerang Books Account Holder - it's free to sign up and there are great benefits!)

Richard Evanoff teaches International Communication and Environmental Ethics at Aoyama Gakuin University in Tokyo, Japan. He holds a Ph.D. from the Institute for Environment, Philosophy, and Public Policy at Lancaster University in the UK.

A Preview for this title is currently not available.
More Books By Richard Evanoff
View All