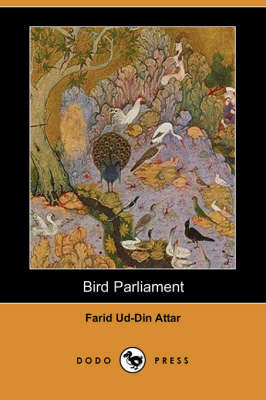 Abu Hamid bin Abu Bakr Ibrahim (1142-1220), much better known by his pen-name Farid Ud-Din Attar, was a Persian and Muslim poet, Sufi, theoretician of mysticism, and hagiographer. He was a poet of the Seljuq period. It seems that he was not well known as a poet in his own lifetime, except at his home town, and his greatness as a mystic, a poet, and a master of narrative was not discovered until the 15th century. Receiving an excellent education in various fields, he practiced the profession of pharmacy. The people he helped in the pharmacy used to confide their troubles in `Attar and this affected him deeply. Eventually, he abandoned his pharmacy store and travelled widely - to Kufa, Mecca, Damascus, Turkistan, and India, meeting with Sufi Shaykhs - and returned promoting Sufi ideas. His works reflect the whole evolution of the Sufi movement. They were the inspiration of Rumi and many other mystic poets. Amongst his most famous works are: Asrar Nameh (Book of Secrets), Elahi Nameh (Divine Book), Tadhkirat Al-Auliya (The Memorial of the Saints) and Manteq al-Tayr (Bird Parliament).

» Have you read this book? We'd like to know what you think about it - write a review about Bird Parliament (Dodo Press) book by Farid Ud-Din Attar and you'll earn 50c in Boomerang Bucks loyalty dollars (you must be a Boomerang Books Account Holder - it's free to sign up and there are great benefits!)