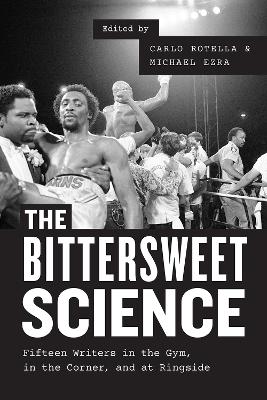 Fifteen Writers in the Gym, in the Corner, and at Ringside

Weighing in with a balance of the visceral and the cerebral, boxing has attracted writers for millennia. Yet few of the writers drawn to it have truly known the sport-and most have never been in the ring. Moving beyond the typical sentimentality, romanticism, or cynicism common to writing on boxing, The Bittersweet Science is a collection of essays about boxing by contributors who are not only skilled writers but also have extensive firsthand experience at ringside and in the gym, the corner, and the ring itself.

Editors Carlo Rotella and Michael Ezra have assembled a roster of fresh voices, ones that expand our understanding of the sport's primal appeal. The contributors to The Bittersweet Science-journalists, fiction writers, fight people, and more-explore the fight world's many aspects, considering boxing as both craft and business, art form and subculture. From manager Charles Farrell's unsentimental defense of fixing fights to former Golden Glover Sarah Deming's complex profile of young Olympian Claressa Shields, this collection takes us right into the ring and makes us feel the stories of the people who are drawn to-or sometimes stuck in-the boxing world. We get close-up profiles of marquee attractions like Bernard Hopkins and Roy Jones Jr., as well as portraits of rising stars and compelling cornermen, along with first-person, hands-on accounts from fighters' points of view. We are schooled in not only how to hit and be hit, but why and when to throw in the towel. We experience the intimate immediacy of ringside as well as the dim back rooms where the essentials come together. And we learn that for every champion there's a regiment of journeymen, dabblers, and anglers for advantage, for every aspiring fighter, a veteran in painful decline.

Collectively, the perspectives in The Bittersweet Science offer a powerful in-depth picture of boxing, bobbing and weaving through the desires, delusions, and dreams of boxers, fans, and the cast of managers, trainers, promoters, and hangers-on who make up life in and around the ring.

» Have you read this book? We'd like to know what you think about it - write a review about Bittersweet Science book by Carlo Rotella and you'll earn 50c in Boomerang Bucks loyalty dollars (you must be a Boomerang Books Account Holder - it's free to sign up and there are great benefits!)

Carlo Rotella is director of the American Studies program at Boston College. His books include Playing in Time: Essays, Profiles, and Other True Stories and Cut Time: An Education at the Fights, both also published by the University of Chicago Press. He writes for the New York Times Magazine, and he has been a regular op-ed columnist for the Boston Globe and radio commentator for WGBH. His work has also appeared in the New Yorker, Harper's, the Believer, Washington Post Magazine, and Best American Essays. Michael Ezra is professor of American multicultural studies at Sonoma State University. His books include Muhammad Ali: The Making of an Icon and The Economic Civil Rights Movement: African Americans and the Struggle for Economic Power. His work has been published by Deadspin, Al Jazeera, Politico, and the Guardian.

A Preview for this title is currently not available.
More Books By Carlo Rotella
View All

The World Is Always Coming to an End: Pulling Together and Apart in a Chicago Neighborhood
Available, ships in 8-11 days
$60.61 $67.35

The World Is Always Coming to an End - Pulling Together and Apart in a Chicago Neighborhood
Not Yet Published
$28.76 $31.95