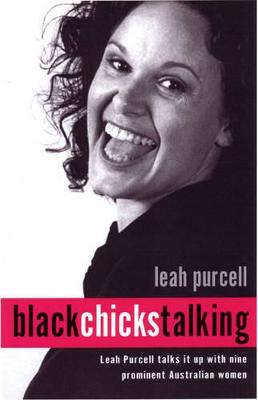 In Black Chicks Talking nine young Aboriginal women, successful in a variety of professions, tell their stories to Leah Purcell. These are diverse stories from women of surprisingly different backgrounds. Some have achieved success in the white fella s world; others are working to improve life within Aboriginal communities or maintain indigenous traditions increasingly under siege.The book is a journey of discovery for both interviewer and subject, as Leah and the other women explore their backgrounds, aspirations, passions, spirituality and their own place in Australia. Portraits of the women by renowned painter Robert Hannaford will be a feature of the book.Black Chicks Talking is set to rout the old stereotypes and showcase some of the young black women who are putting their stamp on the Australian cultural and political landscape. Their stories are at once uplifting and deeply moving, some a timely reminder that the wrongs of the past cast a wide shadow.The chicks are: Kathryn Hay (former Miss Australia), Cilla Malone (community worker), Frances Rings (dancer), Deborah Mailman (actor), Sharon Finnan (netballer), Rachel Perkins (film maker), Tammy Williams (youth affairs spokesperson), Rosanna Angus (tour guide), Liza Fraser-Gooda (marketing manager) and Leah Purcell, whose story and opinions are interwoven with those of her subjects.

» Have you read this book? We'd like to know what you think about it - write a review about Black Chicks Talking book by Scott Rankin and you'll earn 50c in Boomerang Bucks loyalty dollars (you must be a Boomerang Books Account Holder - it's free to sign up and there are great benefits!)

Leah Purcell is an Australian singer, songwriter, actor, choreographer and director. She grew up near an Aboriginal mission in Murgon, Queensland. Her career took off when she landed a job on the cable TV station Red . Stints on Police Rescue and Fallen Angels and a role in Bran Nue Dae followed. Leah s one woman play, Box the Pony was hugely successful in Australia and the UK and the playscript (Hodder, 1999) won the NSW Premier s Award and the Qld Premier s Award. Leah recently won an IF award for her role in the critically acclaimed Lantana.

A Preview for this title is currently not available.
More Books By Scott Rankin
View All