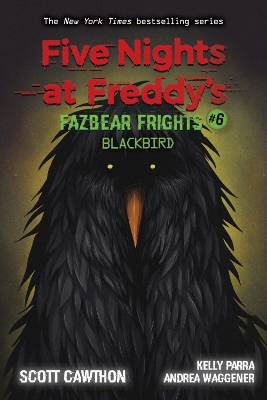 Five Nights at Freddy's fans won't want
to miss this pulse-pounding collection of three novella-length tales
that will keep even the bravest FNAF player up at night...

Haunted by the past...
To avoid confronting an ugly truth, Nole falls prey to a monster
that punishes past transgressions. Growing weaker by the day,
nine-year-old Jake looks back on the time before he was sick, imagining
life as if he were well again. And, forever desperate to prove
his worth to his arrogant brother and distant father, Toby chases
victory at an arcade game with horrifying consequences. But
in the unpredictable world of Five Nights at Freddy's,
sometimes the past can take on a life of its own.
In this sixth volume, Five Nights at Freddy's creator
Scott Cawthon spins three sinister novella-length stories
from different corners of his series' canon, featuring cover
art from fan-favourite artist LadyFiszi.
Readers beware: this collection of terrifying tales is enough
to unsettle even the most hardened Five Nights at Freddy's
fans.

» Have you read this book? We'd like to know what you think about it - write a review about Blackbird (Five Nights at Freddy's: Fazbear Frights #6) book by Scott Cawthon and you'll earn 50c in Boomerang Bucks loyalty dollars (you must be a Boomerang Books Account Holder - it's free to sign up and there are great benefits!)