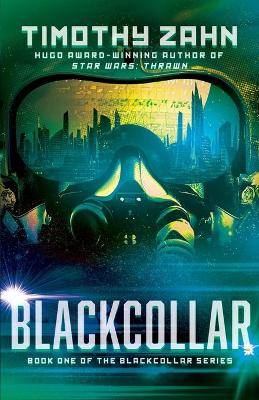 A genetically enhanced fighting force may be humanity's only hope in this novel by the #1 New York Times-bestselling author of Star Wars: Heir to the Empire.

Decades after a successful invasion of Earth and the Terran Democratic Empire by the Ryqril-hostile, leathery-skinned aliens-resistance fighter Allen Caine is training for an undercover mission. He will assume the identity of an aide to the senate-part of the government that colludes with the invaders. But when the mission begins earlier than planned, Caine finds himself stuck on the off-planet outpost of Plinry with no idea of what awaits. He's responsible for the most important mission undertaken by the resistance in twenty years, and when the operation goes awry, Caine's only hope is to locate Plinry's so-called blackcollars-the elusive, martial arts-trained guerilla force whose wartime resistance efforts are legendary. With his life and the freedom of everyone in the TDE on the line, Caine's success will depend on whether or not he can find them. . . .

» Have you read this book? We'd like to know what you think about it - write a review about Blackcollar book by Timothy Zahn and you'll earn 50c in Boomerang Bucks loyalty dollars (you must be a Boomerang Books Account Holder - it's free to sign up and there are great benefits!)

Timothy Zahn is a New York Times-bestselling science fiction author of more than forty novels, as well as many novellas and short stories. Best known for his contributions to the expanded Star Wars universe of books, including the Thrawn trilogy, Zahn won a 1984 Hugo Award for his novella "Cascade Point."He also wrote the Cobra series, the Blackcollar series, the Quadrail series, and the young adult Dragonback series, whose first novel, Dragon and Thief, was an ALA Best Book for Young Adults. Zahn currently resides in Oregon with his family.