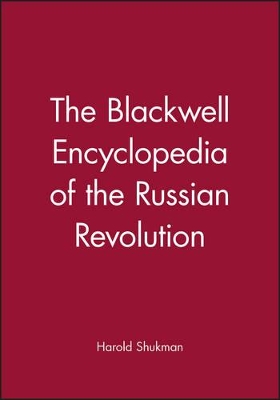 The Blackwell Encyclopedia of the Russian Revolution

Description - The Blackwell Encyclopedia of the Russian Revolution by Harold Shukman

This single volume is an authoritative and accessible guide to the background and progress of the Revolution, written by a team of over forty specialist contributors. Beginning with the radical movements of the mid-nineteenth century, the Encyclopedia covers the development of the revolutionary movement created by the intelligentsia; the condition of the peasants, that of the working class, and of the army; the role of the Tsarist secret police; the 'agents provocateurs'; the revolutionaries' own underground. A substantial section is devoted to the emergence of liberation movements among the national minorities of the borderlands. The Encyclopedia also considers the formation of Soviet institutions, and examines too the emergence of revolutionary culture well before 1917, the avant-garde in art and theatre, and the relationship to the revolution of three major Russian writers, Blok, Gorky and Mayakovsky.

» Have you read this book? We'd like to know what you think about it - write a review about Blackwell Encyclopedia of the Russian Revolution book by Harold Shukman and you'll earn 50c in Boomerang Bucks loyalty dollars (you must be a Boomerang Books Account Holder - it's free to sign up and there are great benefits!)

The Editor of the Encyclopedia, Harold Shukman, is University Lecturer in Modern Russian History at the University of Oxford and a Fellow of St Antonya s College. His books include Lenin and the Russian Revolution and Lenina s Path to Power. He has edited and translated the memoirs of Andrei Gromyko, novels by Anatoly Rybakov, as well as plays by Isaac Babel and Evgeny Shvarts, biographies of Stalin and Lenin by Dmitri Volkogonov, and most recently he edited a collection of articles on Stalina s generals. He is the General Editor of Longmana s multi--volume History of Russia.

A Preview for this title is currently not available.
More Books By Harold Shukman
View All