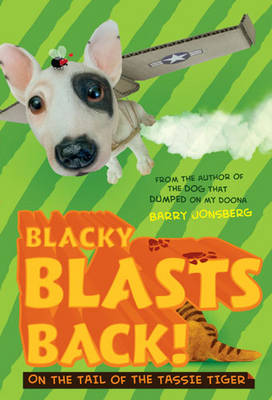 On the Tail of the Tassie Tiger

Blacky's back, smellier than ever. And he's got a new mission for Marcus and Dylan: track down the very last Tassie tiger and save it from extinction. Simple, really.

But throw in some bumbling thylacine hunters, a bully out to get you, a hairy Scotsman on your trail, and anything can - and will - happen. Especially as time is running out.

You can read more Blacky adventures in The Dog that Dumped on My Doona and A Croc Called Capone.

» Have you read this book? We'd like to know what you think about it - write a review about Blacky Blasts Back book by Barry Jonsberg and you'll earn 50c in Boomerang Bucks loyalty dollars (you must be a Boomerang Books Account Holder - it's free to sign up and there are great benefits!)

Blacky is back! As hilarious and adventurous as ever and following on from The Dog That Dumped On My Doona and A Croc Called Capone, Barry Jonsberg carries the characters of Blacky, Marcus and Dyl into this third adventure titled Blacky Blasts Back! On The Tail Of The Tassie Tiger.

Blackie has a new mission for Marcus and Dyl: track down the very last Tassie Tiger and save it from extinction but first Marcus must convince Miss Dowling, the school principal, that he is bad enough to attend the school camp that is only open to the special boys unit. Being bad for Marcus isn't as easy as he thinks and it takes skill, patience and a lot of pleading to get a spot on the boat to Tassie.

It is on his way to camp that all the fun begins – not only is Blacky smellier than ever but Marcus must contend with bullying boys,two unintelligible Scottish instructors,that really don't make things any easier, and bumbling Thylacine hunters.

A great read for the primary age child, Blacky Blasts Back introduces the Tassie Tiger and the environmental issue of extinction. A great book to be shared in the school classroom enhancing further study and projects on the Tassie Tiger. Is the Tassie Tiger extinct? What if there are still a few out their? Why did they become extinct and what could we as humans do to prevent this being the fate of other animals? Barry Jonsberg opens a topic of thought and exploration that is, beyond a doubt, an important issue in Australia today.