The Blaze of Obscurity

Description - The Blaze of Obscurity by Clive James

For many people, Clive James will always be a TV presenter first and foremost, and a writer second - this despite the fact that his adventures with the written word took place before, during and after his time on the small screen. Nevertheless, for those who remember clips of Japanese endurance gameshows and Egyptian soap operas, Clive James reinventing the news or interviewing Hefner and Hepburn, Polanski and Pavarotti, his Postcards from Kenya, Shanghai and Dallas, or Clive James Racing Driver, his rightful place does seem to be right there - on the box, in our homes, and almost one of the family. However you think of him, though, and whatever you remember him for, The Blaze of Obscurity is perhaps his most brilliant book yet. Part Clive James on TV and part Clive James on TV, it tells the inside story of his years in television, shows Clive James on top form both then and now, and proves - once and for all - that he has a way with words... whatever the medium.

Other Editions - The Blaze of Obscurity by Clive James 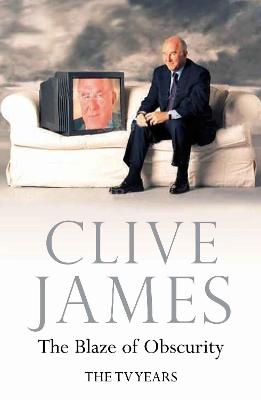 Book Reviews - The Blaze of Obscurity by Clive James

» Have you read this book? We'd like to know what you think about it - write a review about Blaze of Obscurity book by Clive James and you'll earn 50c in Boomerang Bucks loyalty dollars (you must be a Boomerang Books Account Holder - it's free to sign up and there are great benefits!)

Clive James is the author of more than 20 books, including four previous volumes of autobiography (Unreliable Memoirs, Falling Towards England, May Week was in June and North Face of Soho), collections of literary and television criticism, essays, travel writing, verse and novels. In 1992 he was made a Member of the Order of Australia and in 2003 he was awarded the Philip Hodgins memorial medal for literature.