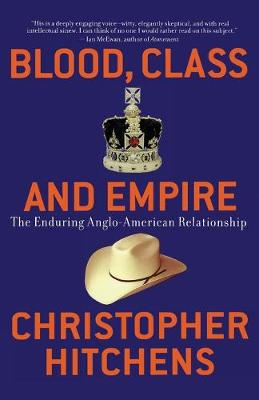 Since the end of the Cold War so-called experts have been predicting the eclipse of America's "special relationship" with Britain. But as events have shown, especially in the wake of 9/11, the political and cultural ties between America and Britain have grown stronger. Blood, Class and Empire examines the dynamics of this relationship, its many cultural manifestations,the James Bond series, PBS "brit Kitsch," Rudyard Kipling,and explains why it still persists. Contrarian, essayist and polemicist Christopher Hitchens notes that while the relationship is usually presented as a matter of tradition, manners, and common culture, sanctified by wartime alliance, the special ingredient is empire transmitted from an ancien regime that has tried to preserve and renew itself thereby. England has attempted to play Greece to the American Rome, but ironically having encouraged the United States to become an equal partner in the business of empire, Britain found itself supplanted.

Other Editions - Blood, Class and Empire by Christopher Hitchens » Have you read this book? We'd like to know what you think about it - write a review about Blood, Class and Empire book by Christopher Hitchens and you'll earn 50c in Boomerang Bucks loyalty dollars (you must be a Boomerang Books Account Holder - it's free to sign up and there are great benefits!)

Christopher Hitchens is a contributing editor to Vanity Fair. His numerous books include Letters to a Young Contrarian and Why Orwell Matters.