On a cross-country journey to hell, fear is the engine and vengeance is the destination as Christopher Rice's Amazon Charts bestselling series continues.

As the test subject of an experimental drug, Charlotte Rowe was infused with extraordinary powers. As the secret weapon of a mysterious consortium, she baits evil predators and stops them in their tracks. But it takes more than fear to trigger what's coursing through Charlotte's blood. She needs to be terrorized. Serial killer Cyrus Mattingly is up to the task.

Cyrus is a long-haul truck driver, and his cargo bay is a gallery of horrors on wheels. To stop his bloodshed, Charlotte will become his next victim, reining in her powers so she can face each of his evils in turn.

As much as they know about Cyrus-his method of selecting victims, his prolonged rituals-there is something they don't. What happens on the dark and lonely highways is only the journey. It's the destination that's truly depraved. Before she can unleash vengeance on a scale this killer has never seen, Charlotte and her team will have to go the distance into hell. 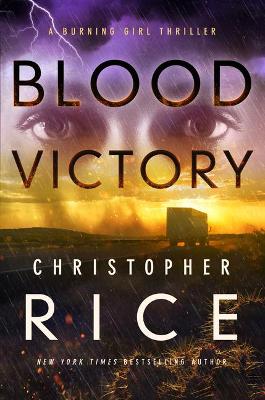 » Have you read this book? We'd like to know what you think about it - write a review about Blood Victory: A Burning Girl Thriller book by Christopher Rice and you'll earn 50c in Boomerang Bucks loyalty dollars (you must be a Boomerang Books Account Holder - it's free to sign up and there are great benefits!)


A Preview for this title is currently not available.
More Books By Christopher Rice
View All