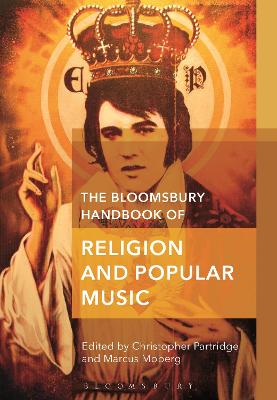 The Bloomsbury Handbook of Religion and Popular Music

The Bloomsbury Handbook of Religion and Popular Music is the first comprehensive analysis of the most important themes and concepts in this field. Drawing on contemporary research from religious studies, theology, sociology, ethnography, and cultural studies, the volume comprises thirty-one specifically commissioned essays from a team of international experts. The chapters explore the principal areas of inquiry and point to new directions for scholarship. Featuring chapters on methodology, key genres, religious traditions and popular music subcultures, this volume provides the essential reference point for anyone with an interest in religion and popular music as well as popular culture more broadly.

Religious traditions covered include Christianity, Islam, Judaism, Hinduism, Buddhism, Paganism and occultism. Coverage of genres and religion ranges from heavy metal, rap and hip hop to country music and film and television music. Edited by Christopher Partridge and Marcus Moberg, this Handbook defines the research field and provides an accessible entry point for new researchers in the field. » Have you read this book? We'd like to know what you think about it - write a review about Bloomsbury Handbook of Religion and Popular Music book by Christopher Partridge and you'll earn 50c in Boomerang Bucks loyalty dollars (you must be a Boomerang Books Account Holder - it's free to sign up and there are great benefits!)

Christopher Partridge is Professor of Religious Studies in the Department of Politics, Philosophy and Religion at Lancaster University, UK. Recent publications include Mortality and Music: Popular Music and the Awareness of Death (Bloomsbury, 2015) The Occult World (2014, ed.,), The Lyre of Orpheus: Popular Music, the Sacred and the Profane (2014), Dub in Babylon (2010), and Holy Terror: Understanding Religion and Violence in Popular Culture (2010, ed.). He is co-editor of Bloomsbury Studies in Religion and Popular Music. Marcus Moberg is Senior Researcher in the Department of Comparative Religion, Abo Akademi University, Finland. He is the author of Christian Metal (Bloomsbury, 2015). His research is focused on contemporary intersections between religion, new media, popular culture, and consumer culture.

A Preview for this title is currently not available.
More Books By Christopher Partridge
View All