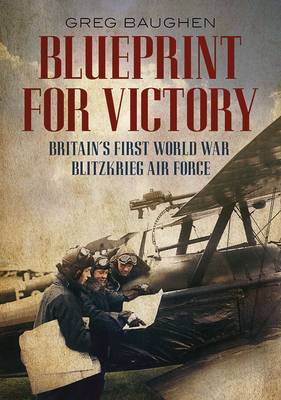 In this radical reappraisal, Greg Baughen has used archive material to build up an intriguingly different picture of how air power developed in Britain before and during the First World War. Gone are the archetypal conservative army commanders stubbornly refusing to accept the new aerial weapon. Instead, Baughen reveals how even before the outbreak of war, the British Army had appreciated the potential of the aeroplane and describes in detail how during the war, air support evolved to a level of efficiency that would not be attained again by the RAF until the closing stages of the Second World War.

» Have you read this book? We'd like to know what you think about it - write a review about Blueprint for Victory book by Greg Baughen and you'll earn 50c in Boomerang Bucks loyalty dollars (you must be a Boomerang Books Account Holder - it's free to sign up and there are great benefits!)

Greg Baughen was educated at Sussex University where he obtained a degree in Mathematics. His interest in military aviation was sparked by curiosity over the calamitous defeat of British and French forces in the Battle of France in 1940. For many years, he has delved through public archives in Paris and London seeking explanations. The quest has taken him back to the origins of air power in both countries and forward to what might have been in the Cold War. Baughen is currently working on a series of studies that will trace the history of the RAF from its origins through to the thermonuclear age.

A Preview for this title is currently not available.
More Books By Greg Baughen
View All