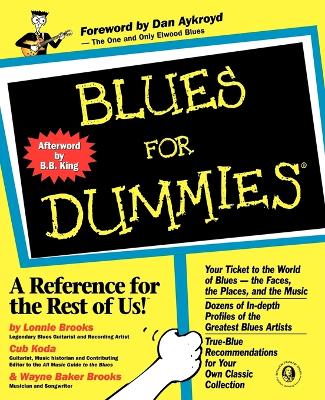 Get your mojo working as you take a musical trip from the Mississippi Delta to Chicago's gritty South Side and points beyond with Blues For Dummies, an insightful, toe-tappin', music lovers' guide to the blues. Popular blues guitarist Lonnie Brooks serves as your tour guide through the life and times of the blues, from the acoustic mystique of Robert Johnson and Son House to the urban blues men and women of today: John Lee Hooker, Robert Cray, B.B. King, Etta James, Koko Taylor, Stevie Ray Vaughan, and, of course, Brooks himself.

Blues For Dummies travels from sad to glad, with stops along the way at heartache and despair, hope and joy, on the road to great music. Get hip to the different styles and eras of the blues; discover what makes the blues so blue; find out "Who's Who" among four generations of blues musicians; and make tracks to the best blues clubs on the planet with this great, easygoing reference.

» Have you read this book? We'd like to know what you think about it - write a review about Blues for Dummies book by Lonnie Brooks and you'll earn 50c in Boomerang Bucks loyalty dollars (you must be a Boomerang Books Account Holder - it's free to sign up and there are great benefits!)

Lonnie Brooks is a popular blues guitarist and recording artist, playing more than 150 shows annually around the world. He has been performing for more than 40 years and has played with some of the biggest names in music, including B.B. King, Les Paul, and James Brown. Cub Koda is a guitarist, music historian, and regular columnist for Discoveries magazine. He is also a contributing editor to the All Music Guide to the Blues. As the leader of Brownsville Station, Koda is also known as the writer of their biggest hit, Smokin' in the Boys Room. Wayne Baker Brooks is a Chicago-based blues songwriter and guitarist. He has played rhythm with the Lonnie Brooks Band and lead guitar with his own band. He is the founder and president of the Blues Island Production Company.

A Preview for this title is currently not available.
More Books By Lonnie Brooks
View All