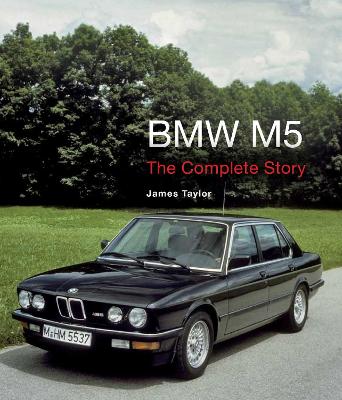 BMW's M5 was a simple concept: a production 5 Series saloon re-developed for high performance by the Motorsport division. The M5 was the car that really initiated the legend of the M-cars from BMW. The letter M has been applied to a high-performance BMW as early as 1978, but that year's M1 was an exotic supercar. It had the right image, but the M1 was never going to bring in major profits. The M5 was much simpler in concept. It was and remains a production 5 Series saloon, redeveloped for ultra-high performance. Manufacturing costs were minimized, allowing BMW to price the car more attractively and still bring in healthy profits. This new book charts the development of the M5 across five generations. For all fans of the BMW M5, this book provides essential background. It is packed with the facts and details that make the M5 legend come alive. AUTHOR: James Taylor is a distinguished motoring historian with more than fifty books to his credit. He also writes for specialist magazines both in Britain and overseas, covering the whole motoring spectrum from classics to current models. His specialist subject might be regarded as Rover, but he has contributed several titles to the Crowood AutoClassic series on subjects as diverse as Land Rovers and BMWs. 211 colour photos

» Have you read this book? We'd like to know what you think about it - write a review about BMW M5 book by James Taylor and you'll earn 50c in Boomerang Bucks loyalty dollars (you must be a Boomerang Books Account Holder - it's free to sign up and there are great benefits!)

James Taylor has been writing professionally about cars since the late 1970s, and his interests embrace a wide range of older cars of all makes and nationalities, as well as classic buses, lorries and military vehicles. However, he also enjoys keeping abreast of current special-interest models such as the BMW M5 because, he believes, today's interesting cars are tomorrow's classics. This book is a companion to his recent Crowood publication, BMW M3 - The Complete Story.

A Preview for this title is currently not available.
More Books By James Taylor
View All