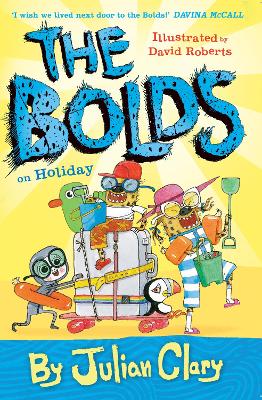 The Bolds on Holiday

Description - The Bolds on Holiday by Julian Clary

Carry on camping with dream team Julian Clary and David Roberts!
It's the summer holidays, and the hairiest family in Teddington decide to take a well-earned holiday by the seaside. With their extended hyena family in tow, they head on down to Cornwall for a spot of camping. But it's never long before trouble sniffs these hyenas out, and Bobby is mistaken for a pup and snatched by a wicked dognapper.
The Bolds will need all their ingenuity to hunt her down and rescue all the pilfered pooches. But can these hyenas-in-disguise save the day, without letting the cat out of the bag...?

'I wish we lived next door to the Bolds!' Davina McCall

Other Editions - The Bolds on Holiday by Julian Clary

Book Reviews - The Bolds on Holiday by Julian Clary

» Have you read this book? We'd like to know what you think about it - write a review about Bolds on Holiday book by Julian Clary and you'll earn 50c in Boomerang Bucks loyalty dollars (you must be a Boomerang Books Account Holder - it's free to sign up and there are great benefits!)

Julian Clary (Author) Julian Clary is a comedian, entertainer and novelist, who has toured across the world with his one-man shows. He became a household name in the late 1980s, and remains one of the country's most popular (and least predictable) entertainers. Julian has appeared on numerous popular TV shows including Celebrity Big Brother (which he won), Strictly Come Dancing, This Morning, QI, Have I Got News For You and is a regular panellist on BBC Radio 4's Just a Minute. He has starred in West End productions of Taboo and Cabaret, and appears in panto most years - he loves wearing silly clothes and lots of make up! Julian also narrates the Little Princess children's television series. He lives in Kent with his husband, dogs and several chickens. David Roberts (Illustrator) David Roberts is an award-winning illustrator who has earned great acclaim for his distinctive style. He was born in Liverpool and studied fashion design at university in Manchester. After graduating, he worked as a milliner and a fashion illustrator, but always felt his true calling was in children's books. David finally realised his dream when his first book was published in 1998, and since then he has collaborated with some of Britain's finest children's authors, including Julia Donaldson, Sally Gardner, Philip Ardagh and Jacqueline Wilson. He is also the creator of the popular Dirty Bertie books. He lives in London with his husband. His book Little Red was shortlisted for the 2005 Kate Greenaway Medal. In 2006 he won the NestlU Children's Book Prize Gold Award for his line drawings in Mouse Noses on Toast.