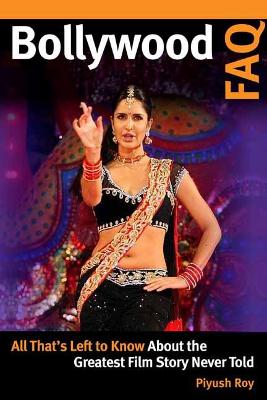 Bollywood a popular nomenclature for India's national film industry in the Hindi language along with the Taj Mahal yoga Buddha and Mahatma Gandhi is one of the best-known introductions and universally recognized associations with India across the world today. Despite its predominant narrative styles not confirming to the First World European and/or American cinema structure Indian cinema is increasingly viewed as the world's second-most important film industry after Hollywood with box-office influence crossing over with European cinema.THEBollywood FAQE provides a thrilling entertaining and intellectually stimulating joy ride into the vibrant colorful and multi-emotional universe of the world's most prolific (over 30 000 film titles) and most-watched film industry (at 3 billion-plus ticket sales). Bollywood blockbusters are simultaneously screened in theaters and cinemas in over 100 nations from the USA to Japan New Zealand to the Netherlands and Peru to Pakistan. Every major Hollywood studio (Warner Bros. Fox Star Disney Sony Pictures and Viacom 18) is now making or distributing Bollywood films.THYet much of Indian cinema continues to amuse and confuse audiences and critics outside of India including during their first/occasional introductions to its in the words of Salman Rushdie epico-mythico-tragico-comico-super-sexy-high-masala-art form in which the unifying principle is a techni-color-storyline. THEBollywood FAQE explains and explores the above myths and magic. It introduces India's maharajah-like stars and their cult-commanding stardom. Movie buffs will find a ready reckoner on iconic Bollywood films with a bonus must-watch listing of the cinema's most spectacular song-and-dance moments highlighting the pleasures and popularity of a national cinema that has come to be a genre in itself.THThis book is a reader-friendly reference to everything one has ever wanted to know about the spectacular robust humongous colorful and dramatic multi-generic cinematic being called Bollywood. The narrative is enriched with insider insights culled from its author's long career as a film writer and critic in the city of Bollywood Bombay (now Mumbai).

» Have you read this book? We'd like to know what you think about it - write a review about Bollywood FAQ: All That's Left to Know About the Greatest Film Story Never Told book by Dr. Piyush Roy and you'll earn 50c in Boomerang Bucks loyalty dollars (you must be a Boomerang Books Account Holder - it's free to sign up and there are great benefits!)